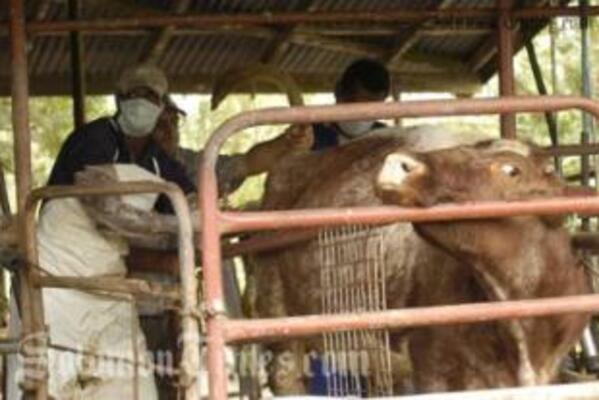 Some sections of Fiji's cattle industry are being threatened by the re-emergence of Brucellosis, a bacterial disease found in the reproductive tracts of animals but which can be contracted by humans.

According to Fiji Times Online, the disease, which had been dormant for 10 years, has re-emerged in cows in one of Fiji's provinces, Tailevu North, forcing authorities to place a quarantine over the area.
The brucella abortus is the bacteria in cattle that causes brucellosis.

According to the Ministry of Primary Industries, the quarantine has been in place since June 16, with the monitoring of all movement in the area and calls for the disinfection of all vehicles leaving Wainivesi Road. The ministry said tests were conducted on 2464 cows on 10 farms in Wainivesi, with 244 testing positive for the brucella abortus.

"We have started slaughtering infected cows," said MPI veterinarian Dr Robin Achari. "We're advising people not to panic and for farmers to report to us if they have a sick cow."

The first sign a cow is suffering from brucellosis would be if it has aborted.

Dr Achari said great care should be taken in such circumstances.

"We advise those farm workers not to touch the calves or clean the cows because that is one way the bacteria can infect humans," Dr Achari said.

"People should also refrain from drinking raw milk until we give the clearance."

Fiji first experienced an outbreak of brucellosis in 1983 to 1986 and managed to eradicate it in 1989, according to Fiji Times Online.
The authorities are working hard to contain the disease and prevent it from spreading to other farms in the country and are into the second phase of testing and slaughtering of affected animals and quarantining stock and vehicles moving out from the affected area.

According to Dr. Achari, the third phase of the operation would entail surveillance and monitoring which will take about two years and after the disease is being contained, then they can declare that their cows are free from the disease.

Meanwhile, milk suppliers in the affected area have been directed to stop supplying milk directly to clients until further notice as raw milk is known as a transmitting agent of brucellosis to humans, according to Dr. Achari.
The bacteria is not killed by boiling, only by pasteurization and unpasteurised milk is known to spread the disease to humans.

Fiji's main dairy company, Rewa Dairy, has assured that its milk and meat products are safe for consumption and according to the report, Dr. Achari has said that there is no need to panic.

However, those selling, buying and consuming raw milk, especially those who have their own milking cows, must boil milk for about 30 to 45 minutes as the core temperature of the milk must exceed 80 degrees Celsius to kill the bacteria.
Those supplying raw milk are urged to direct their products to Rewa Dairy to be pasteurized.

With regards to humans, according to the report by Fiji Times Online, 'there is a low possibility of human fatalities from Brucellosis but those infected will suffer from the disease for the rest of their lives if they are not treated soon'.

"We are advising all farm workers, farm hands, livestock officers, to have their blood screened. The disease may have been circulating within our farming system for a while before we picked it up."