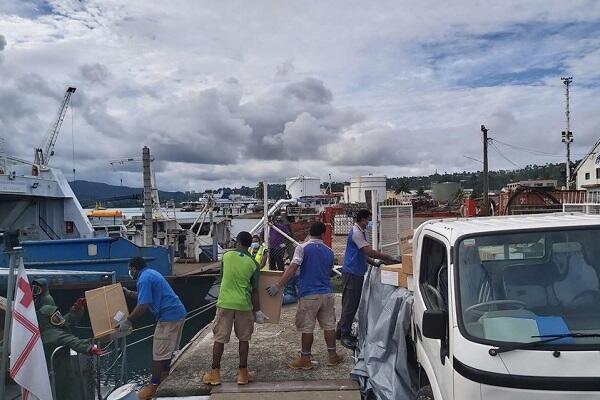 With these challenges facing the Pacific, the Pacific Islands Forum Economic Ministers Meeting (FEMM) scheduled to take place next week virtually, is expected to center on mapping out economic strategies for the pacific region.
Source: PIFS
By Georgina Kekea
Share
Thursday, 06 August 2020 14:26 PM

The economic impact of covid-19 in the pacific region is said to be devastating.

Rarawa highlighted only three areas that COVID-19 has had an impact on. The three areas are economic growth, tourism and employment.

A June 2020 survey by Pacific Trade and Invest shows that 88 percent of businesses in the region report negative impact and 66 percent report significant declines in sales and revenue.

“According to the IMF June quarterly outlook, the negative growth in the region ranges from 21.7 percent in Fiji, 11.9 percent in Palau, 3.7 percent in Samoa down to 0.6 percent in Vanuatu. These declines are being driven mainly by the slowdown in economic activities, trade, export, employment, and also a decline in remittance flows to the region”, Rarawa says.

“So in Samoa for example, over 64 percent of those people who have lost their jobs are women”, Rarawa says.

“Of the total, 327 were males and 204 were females. Other respondents did not specify the number of male and female workers being laid off. The single highest instance of worker temporarily laid-off was 153 workers for one company with the lowest number being one dismissal”, SICCI says.

In the tourism sector, Fiji, Cook Islands, Samoa, Palau, Vanuatu and other Pacific countries are mostly affected losing 40 percent of much needed income for the countries.

“The closure of borders and the restrictions on travel has forced many hotels and resorts especially the small and medium size operations to close down or scale down their operations. And lay off their workers. The belief is that it will take many years before the tourism sector in the region recovers from the impacts of covid 19 pandemic, says Rarawa.

At the same time, Solomon Islands Finance Minister, Harry Kuma before the Public Accounts Committee (PAC) says the COVID-19 pandemic is confirmed to have a severe impact on the country’s economy.

“The country now is confirmed to record an economic recession in 2020 with a significant decline in Real GDP growth to -4.9 percent. The contraction in the economy is primarily owing to reductions in logging and fishing activity, significant negative growth in tourism sector, delayed construction acuities and weak aggregate demand fueling contractions in wholesale and retail trade and manufacturing”, Kuma says.

Kuma says it is confirmed that the revenue shortfall for the year would be substantially greater than 2020 revenue estimates.

With these challenges facing the Pacific, the Pacific Islands Forum Economic Ministers Meeting (FEMM) scheduled to take place next week virtually, is expected to center on mapping out economic strategies for the pacific region.

PIFS Secretary General, Dame Meg Taylor says Ministers will also call on members, development partners and all stakeholders for greater, deeper and more innovative regional approaches to the challenges faced in the Pacific. She says not only for the Pacific island countries to recover from the pandemic but also builds a strong platform for economic stability and resilience in the long term.

Solomon Islands is a member of the Pacific Islands Forum Secretariat.