Course Takes Mystery Out of Mining 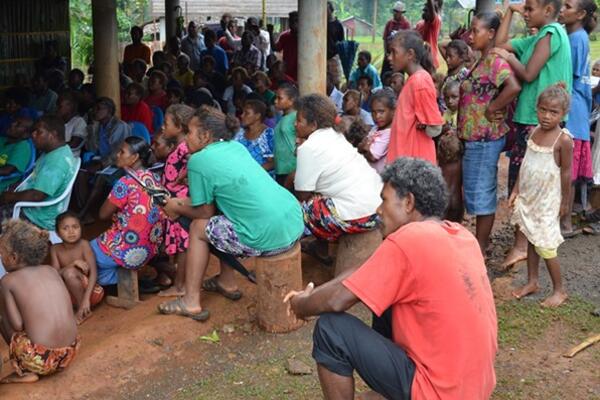 Isabel Province communities in and around proposed mine sites are now feeling more informed about mining following the launch last week of an awareness programme to be rolled out across the province.

The "What is Mining? Train the Trainer" course was developed by the Isabel Mothers Union and The Nature Conservancy (TNC) Solomon Islands with technical support from The University of Queensland. The course was opened by Isabel Provincial Government Deputy Premier the Honourable Michael Meredi.

It was created following resolutions made late last year during a hugely successful public mining forum held in the provincial capital of Buala. One of those resolutions identified a lack of information on mining to be a major problem for communities lying within or near mining sites or ‘tenements’. It called on TNC to help raise awareness of what the industry will mean for the country.

The What is Mining? course is the first response to that call and was held over three days in the highland village of Kolomola at the southern end of Isabel. Over 50 community members attended, representing districts across Isabel island.

The aim of the course is to provide participants with a good basic understanding of what mining is, the legal issues, the types of mining planned for the Solomon Islands, possible environmental and social impacts, and the possible benefits communities can expect.

Participants will now return to their own communities and, with support from Mothers Union, pass on their new-found knowledge armed with training resources designed specifically for Solomon Island audiences. Those resources include large weather-proof colour flip charts, maps of mining sites and pijin-language documentary videos.

Moira Dasipio, President of the Isabel Mothers Union, says that many Isabel landowners will soon be asked to sign agreements with mining companies, despite having virtually no understanding of what mining will mean for them. For some landowners, planning has gone on for almost seven years, yet they have yet to be informed adequately about what it will mean. “Many landowners think mining will be over quickly like logging. They have no idea that it will last for decades or that it will have huge and lasting impacts on their land.”

She says it was especially important to launch the course in a village like Kolomola: “Working directly with communities means we reach everyone, not just the leaders. We involved everyone – the chiefs, mothers, fathers, youth and children.”

She said the training had forced leaders to focus on the issue of mining. “They can no longer sit on the fence and claim they do not understand what the issues are. The time has come for everyone to make an informed choice about mining.”

TNC project manager for Melanesia, Robyn James, says there are prospecting licences and mining leases expanding across all of the Solomon Islands and the national government is looking to mining as a future cornerstone of the economy.
“That is why it is so important that people in rural areas have access to information so they have a better chance of contributing to decisions and the agreements that will shape their futures.”

She confirmed that TNC had also been asked by communities in Choiseul, Guadalcanal, Wagina, Rennell and Western Province to run awareness raising workshops. “It’s the same across the country – people are being asked to make choices about something they have little idea about. Some communities in Wagina and Guadalcanal have only found out there are plans to mine when mining machinery is off-loaded onto their land.

“TNC is not saying yes or no to mining. However, we feel strongly that people must understand what it all means – that there a long-term impacts and also long-term benefits to be had if mining is done well. We want to see good agreements made right from the start, rather than communities feeling rushed to make decisions.”

She says the aim is to eventually roll out the training to all Solomon Islands communities that request it.