“Corruption is the Opposite of Development” 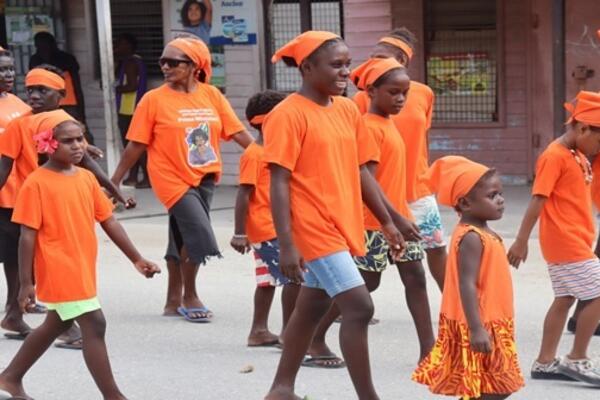 Promoting the 16 Days of Activism and walking against corruption are children, during the Anti-Corruption Day march in Gizo.
Source: Supplied
Share
Wednesday, 09 December 2020 15:48 PM

“Corruption undermines development, inhibits economic growth, hinders the delivery of services and undermines good governance and the rule of law” was the conclusion of the participants at the outreach event in Gizo, Solomon Islands, marking the December 9th International Anti-Corruption Day (IACD).

International Anti-Corruption Day (IACD) is observed all over the world every year to raise the awareness in combatting corruption and promoting the implementation of the United Nations Convention Against Corruption (UNCAC), endorsed by the General Assembly of the United Nations in 2003. The event brings together people from diverse backgrounds and serves as a global call for action in fighting corruption.

This year responding to the UN global campaign “Recover with Integrity” under the patronage of the Office of the Prime Minister, integrity agencies, Office of the Ombudsman, Leadership Code Commission, Law Reform Commission, Office of the Director of Public Prosecution, Public Solicitors Office, Civil Society Organizations and the Provincial Administration in partnership with United Nations Development Programme (UNDP) hosted the observance of the IACD, for the first time in Gizo, Western Province, Solomon Islands .

The program commenced with an outreach event at the indigenous Titiana community at the outskirts of Gizo. This was followed by a public march throughout Gizo and a public discussion which gathered more than 100 participants from all layers of the society, with an aim to provide an open platform to discuss the adverse effects of the corruption and the role that integrity institutions and overall population have in combatting corruption.

In his opening address, Deputy Secretary to Prime Minister Dr. Derek Mane addressing the participants stated: “It takes a concerted effort of all citizens to fight corruption in order to minimize it. Provincial governments and people must take ownership of initiatives established to fight against corruption and embed it in provincial activities including ordinances to suit their context.” “The newly established Solomon Islands Independent Commission Against Corruption is a clear manifestation of the government’s commitment in fighting corruption.” added Dr. Mane.

Emphasizing the partnership and cooperation with the Government of Solomon Islands, UNDP Project Manager Mr. Vardon Hoca stated “Corruption is a complex social, political and economic phenomenon that affects all countries.

“Corruption is one of the biggest obstacles to achieving the Sustainable Development Goals (SDGs),” concluded Mr. Hoca.

The event was organized as the part of the Transparency and Accountability Project (TAP) implemented by the UNDP in partnership with the Office of the Prime Minister of Solomon Islands.

The Project recognizes the importance of effective, accountable and transparent institutions for the implementation of the National Development priorities and the Sustainable Development Goals.