Corruption Has No Place in the Workplace 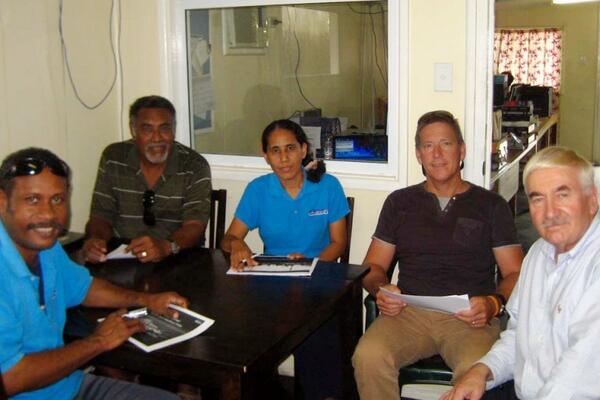 Silentworld General Manager, Glenn Bennett says the training is important for all staff in the company.
Source: Photo supplied
By Irene Scott
Share
Tuesday, 04 June 2013 09:25 AM

Silentworld have just finished intensive training aimed at teaching staff to identify corruption in the workplace.

Silentworld General Manager, Glenn Bennett says the training is important for all staff in the company.

‘We have been training about 15 senior staff members,’ he says. ‘Hopefully they’ll pass these skills down to the more junior members on staff and then that information flows on to the community. It’s a progressive thing, from a little acorn, grows a tree.’

‘There’s a saying that honesty is the best policy. Basically it means if you do things right, then people won’t expect anything else. They won’t expect you to do things that are illegal, it’s a win-win for everyone.’

‘While the focus is often on government and public institutions, it’s important to remember that the fight against corruption is everyone’s responsibility.’

Matson’s Vice President Financial Controller, John Dennen says he has been lucky to fly all around the world, training employees on different aspects of anti-corruption as well as Matson’s philosophy of integrity and honesty.

‘My first assignment was to go to our newly opened offices in China,’ Dennen says. ‘And now within the last six months we’ve moved into the South Pacific. Obviously we have the same responsibility here as we do in the rest of the world.’

He says one of the key lessons is learning about antitrust laws.

‘One thing that people don’t realize, is that you shouldn’t be talking to competitors about prices. Even though it might seem like a casual conversation, if people start to compare it can inevitably lead to matching prices. If everything is priced the same, customers don’t get a good deal.’

He says he also talks about the difference between a bribe and a ‘facilitating payment’.

‘A facilitating payment is where you make a very small payment to help a process move a little faster,’ Dennen says. ‘It doesn’t have to be money, it can be a pack of cigarettes, or a six pack of coco-cola.’

‘Every facilitating payment, no matter how small, is recorded in our books. Transparency is important.’

Managing Director of Silentworld, Glenn Bennett says the training is an important step for the country and the community.

‘I’ve noticed over the years that those businesses that are heavily involved in corrupt practices, never last,’ Bennett says. ‘The longest serving companies are those that do their business right. That protect not only their interests, but the interests of their customers.’

‘Growth comes from good practices, not from corruption. Corruption is a short-term solution that doesn’t benefit the community as a whole. And I hope that by John coming and doing this training we’re instilling in our staff correct practices, and in the long term, we’ll all benefit.’