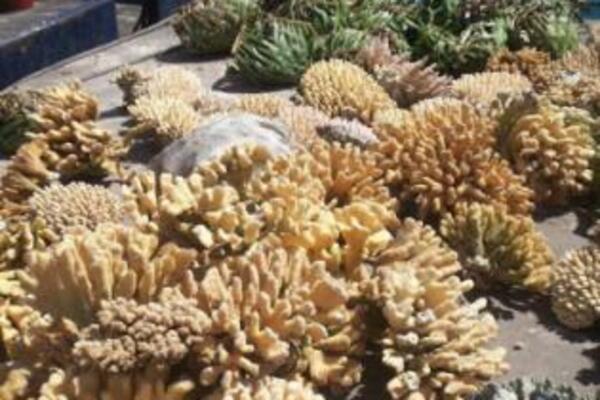 The shipments under investigation, four of which ended up at the Port of Tampa, were said to be accompanied by shoddy paperwork that misidentified certain species.
Source: Photo Supplied
Share
Thursday, 03 May 2012 07:26 AM

There are current investigations surrounding the massive shipments of coral sent from the Solomon Islands to South Florida bound for the curio trade.

The Curio Trade is an off-the-radar market that spans from low-end, roadside shell shops to posh interior-design companies that peddle dead sea life at staggering markups.

Coral reefs, it's often said, are the rain forests of the ocean. But in reality, reefs around the world are disappearing even faster than the rain forests, four times faster, in fact. The reasons are many, but not the least of which is stripping by poachers who then ship the coral to the U.S. to feed the souvenier and home decoration industries.

"For us to still be harvesting coral for the sake of having it on a bookshelf is outrageous at this point. It's just sad," Kate Lunz, a marine biologist familiar with the investigation, tells Riptide.

Sources familiar with the industry say that the buying and selling of coral from countries such as the Solomon Islands is not illegal, but because reefs are increasingly imperiled, the worldwide trade is supposed to be highly regulated.

The shipments under investigation, four of which ended up at the Port of Tampa, were said to be accompanied by shoddy paperwork that misidentified certain species.

But who needs, or wants, 40-foot containers of a fast-dwindling natural resource from half way around the world? And why aren't local shell shops selling corals from local waters?

The species in US waters are protected, and two of the most important ones -- staghorn and elkhorn -- are each listed on the Endangered Species List and protected the same as bald eagles or African elephants. So local shell shops rely on coral yanked from the sea floor of developing nations that are often in the South Pacific, where the government is less scrupulous.

The Tampa shipments under investigation have some scientists worried that the curio trade may no longer be sustainable, especially given the host of forces already working against reefs, including climate change, diseases, over-fishing, and coastal development.

Attempts to speak with high ranking officers within the Ministry of Fisheries were unsuccessful, although one official was quick to point out that the coral trade is currently under review.