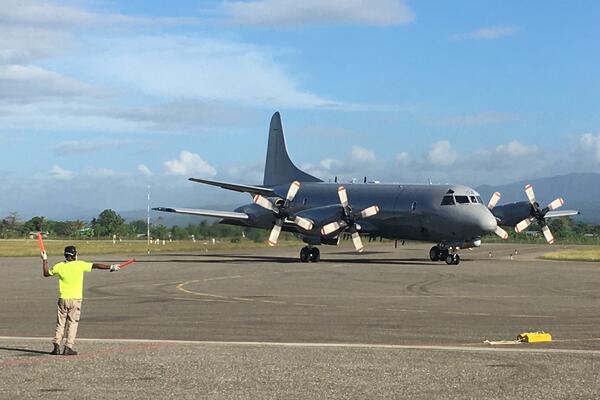 A fisheries monitoring, control and surveillance operation in the Pacific concludes this week, with excellent cooperation demonstrated between nations despite the challenges of COVID-19 continuing to affect surveillance in the region.

The Pacific Islands Forum Fisheries Agency (FFA) led Operation Island Chief took place from 24 August to 4 September, conducting surveillance over the EEZs of all FFA Members. This year the operation included Cook Islands, Niue, Samoa, Tonga and Tuvalu, after their Operation Tui Moana was postponed in May due to the COVID-19 pandemic.

“Especially during these challenging times with the focus of the world on the pandemic, we welcome and sincerely thank our Members and partners for their commitment and cooperation demonstrated across the region to deter illegal, unreported and unregulated fishing in our waters,” says FFA Director-General Dr Manu Tupou-Roosen.

“The strong collaboration between the FFA, our Members, and national security partners has achieved positive surveillance results during this operation.”

FFA Director of Fisheries Operations, Mr Allan Rahari, added “We are particularly delighted to see the way Cook Islands worked with Niue to conduct cooperative surveillance of both EEZs under the Niue Treaty Subsidiary Agreement (NTSA).

The NTSA provides the legal framework for exchange of fisheries data and information, as well as procedures for cooperation in monitoring, prosecuting and penalising operators of IUU fishing vessels. This is the first time that the Niue Treaty Information System (NTIS) has been used to record these arrangements during a surveillance operation.”

The FFA Regional Fisheries Surveillance Centre (RFSC) team, supported by three officers from the Royal Solomon Islands Police Force (RSIPF), had an increased focus on intelligence gathering and analysis, providing targeted information before and during the operation in order to support surveillance activities by Member countries.

Over 180 vessels were sighted or boarded during OP Island Chief. “There were several occasions where the RFSC coordinated with nations to divert assets to conduct specific intelligence-led surveillance,” said Mr Rahari. “There are a couple of fisheries investigations underway from patrol efforts during Op Island Chief but so far no IUU activity has been identified, which shows that our regulatory and surveillance efforts are working.”

Despite the threat of COVID-19, FFA Members and QUAD partners demonstrated their ongoing commitment to fisheries surveillance across the region. “The crews persevered to interrogate vessels, and in some cases to conduct boardings, in some exceedingly uncomfortable weather conditions,” said Mr Rahari. Dockside boardings, as well as boardings at sea, were conducted under national authority, and followed protocols to ensure crew were not exposed to unnecessary risks.