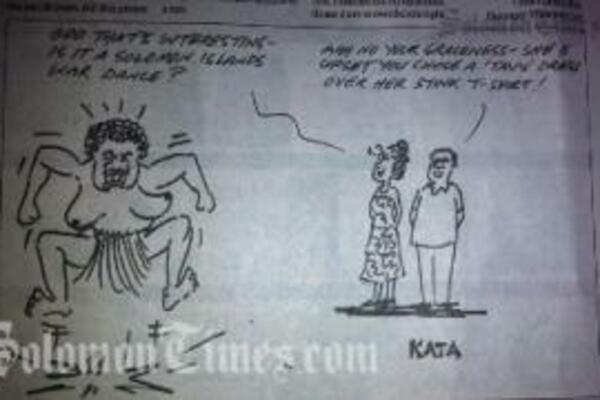 A Cook Islands newspaper has printed a cartoon mocking the huge outcry by Solomon Islanders over the Royal couples outfit for a State banquet dinner hosted by the Governor General.

The royal couple intended to wear local garments from the Solomon Islands, but instead unintentionally wore pieces made in the Cook Islands.

The cartoon has been described as offensive by those that saw it. It shows a bare breasted woman looking rather upset, with a caption stating "she's upset Kate chose a Tavs dress over her stink t-shirt."

Solomon Islanders have taken on the social media expressing their disappointment.

"This is very offensive, the newspaper should post an apology," stated one contributor.

"Solomon Islanders have the right to be upset, if it was the other way around Cook Islanders would also be upset," stated another.

Another said the cartoon depicting a bare chested woman throwing a tantrum is "a real mockery to our women and culture."

A senior government official speaking on the condition of anonymity says that there is always mutual respect between Pacific Islanders, "so the decision to print the cartoon was a poor choice by the editor."

He says the mockery of Solomon Islands by a national newspaper will have negative repercussions for the two countries - both at the official level and general public perceptions.

A statement from the Governor-General's office says US representative Kethie Saunders had placed the Cook Islands clothes into the room of the Royal couple in a breach of protocol.

"We specifically asked for Prince William's measurements so we could make him a shirt with a map of the Solomon Islands on it," the statement reads. "Catherine was advised she would wear one of her own dresses."

Mrs Saunders has told the Solomon Star the clothes from the Cook Islands had the letter from the designer pinned to them, and were not smuggled into the room.

"We are incredibly frustrated that this situation has come about and see Kethie as entirely to blame," said a Government House official.

Clarence House says the Duchess would not have worn the dress if she had known it was not made in the Solomon Islands, and that she feels bad about the confusion.