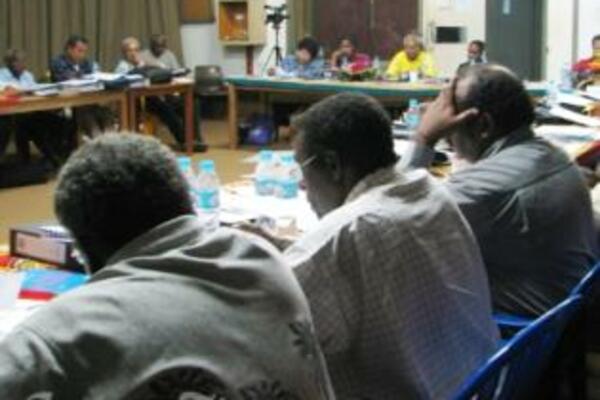 The Constitutional Congress (CC) and Eminent Persons Advisory Council (EPAC) of the Constitutional Reform Program have completed a two-month review of the Draft Federal Constitution of Solomon Islands 2004 in a Joint Plenary on 26 June 2009 at the Red Mansion Inn Conference room.

Changes done to the document were based on various findings of the CC Theme Committees' meetings held late last year; and Community Identification program in which CC Provincial Nominees, held in early 2008 with respective provinces.
The meeting ended with a high-note on participation of members on this very important task, which the government is anticipating and is committed to its completion this year.

Chairlady of CC Mrs. Jenny Tuhaika thanked all members of CC/EPAC for their time, availability and contributions through this long but rewarding review exercise. She acknowledged the support given by families of CC/EPAC members, especially from the provinces, through the past two months.

Consultant Lawyer Mr. Reginald Teutao, the Government's legal personnel from the Constitutional Reform Unit, acknowledged the dedication of CC/EPAC members through this review. Mr. Teutao worked consistently with the CC/EPAC Joint Plenary through the last two months on this review exercise.

"I look forward to working with you all in the next plenary, after the feedback, to put together any contentious issues arising from the feedback in the Draft [Federal Constitution]." Mr. Teutao said in his closing remarks to the Joint CC/EPAC Plenary on its last day of meeting on 26 June 2009.

Depending on the availability of funds, it is envisaged that after this meeting, CC/EPAC Provincial Nominees who were also part of this review will go out to respective provinces to get feedback from provinces with regards to the changes done to the Draft Federal Constitution.