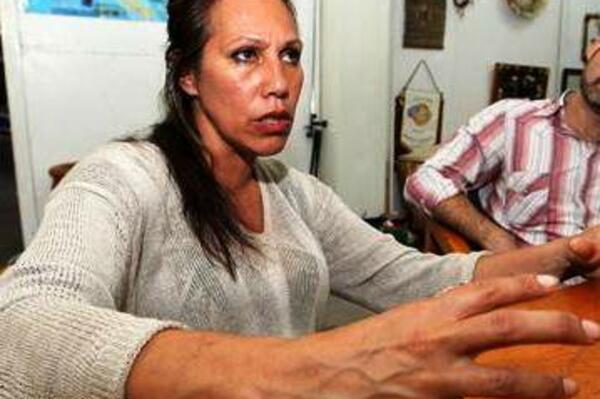 Leading the women is Nina Nawalowalo of The Conch. She is the first Fijian theatre director to produce works which have been performed at international festivals including the New Zealand and Sydney International festivals.
Source: Photo supplied
Share
Monday, 13 May 2013 09:21 AM

For years, female survivors of domestic violence in the Solomon Islands have been afraid of saying anything in public, unable to find a way to stand up to the oppressive abuse they experience on a regular basis at home.

Now, however, all that could change, thanks to a striking display of physical theatre which is giving women the courage to come forward.

The Stage of Change theatre workshop was launched in Honiara today. It is a British Council community theatre project which will take place over the next two years, funded by the European Union and in collaboration with the British High Commission in Honiara.

The aim of the theatre project, which is being run by New Zealand theatre company The Conch in partnership with Solomon Islands NGO SIPPA, is to provide women with training in performance techniques and a platform for creative expression.

It was launched today at the SIPPA offices in Honiara at a gathering attended by dozens of community leaders, media and women's groups. The audience watched a television news report from TV One NZ, by Pacific Affairs reporter Barbara Dreaver, which showed a pilot workshop held at the British High Commission last November, led by the same consortium of organizations.

"This kind of project, which is innovative and distinctive and which plays to EU cultural strengths, is a trailblazer," said British High Commissioner Dominic Meikeljohn.

"Some of our contacts could not believe that we were trying this kind of approach. It adds something new and valuable to the mix, a genuine appreciation of what British culture and education can offer. This is exactly where the UK can add value."

Dominic Meikeljohn said that only one of the 14 women who had participated in the five-day pilot workshop last year had ever done theatre before then. The women had continued to meet on a weekly basis since November, with the support of the Solomon Islands Ministry of Culture, and had even performed recently for visiting British dignitaries who had visited the Solomons. This type of outcome showed the huge potential for the two-year project, in terms of creating long-term impact, he said.

The theatre project is the first of its kind in the Solomon Islands, bringing art and theatre to this remote group of islands in the middle of the South Pacific ocean, and at the same time boosts efforts to get people talking about gender based violence.

"The project is timely because of the upsurge of interest in performing arts due to the recent hugely-successful Festival of Pacific Arts. There is an excitement about the way arts can provide a positive and safe forum to explore and process sensitive issues."

The project includes a series of Stages for Change theatre workshops in Guadalcanal and several provinces, Survivors of Violence Workshops, radio script writing programs and a media-led week-long celebration of women leadership during each of the two years.

It is the latest in a series of EU-supported projects run by the British Council globally. Lending her support locally has been respected public figure Doreen Kuper, who is known as a champion of women's rights.

“Thanks to the involvement of people like Doreen Kuper, and the women she brings with her, as well as the partnership of SIPPA and Nina and Tom's expertise, we have a winning team which is highly motivated and already in action.

"We are grateful to the European Union for identifying the need for this type of intervention around family violence, and for their generous funding support and we look forward to demonstrating the difference that this type of arts-based program can make here."