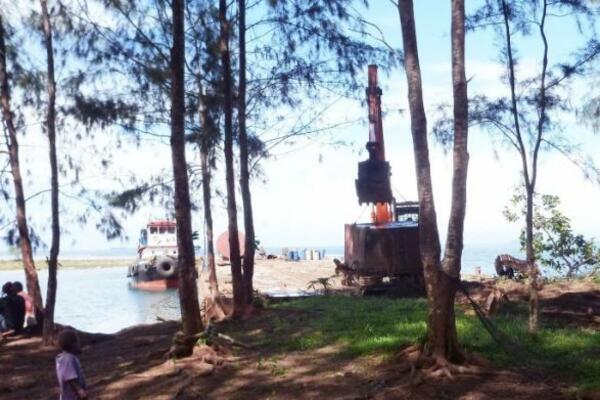 The Kolombangara Island Biodiversity Conservation Association (KIBCA) and landowners went to the High Court seeking an urgent injunction to stop logging activities from starting until the Court has time to decide whether the logging operations are legal.

Many landowners strongly objected to the proposed logging operations and expressed their objections to the relevant Ministries prior to the granting of the timber licence.

The Commissioner of Forests advised landowners to commence legal proceedings should they be aggrieved by the decision to grant a new timber licence.

KIBCA and landowners claimed in the High Court that the necessary legal requirements for granting the licence were not met. This included holding a timber rights meeting and obtaining a development consent from the Ministry of Environment.

The High Court in granting the injunction noted that substantial issues exist which need to be considered at trial and that the chances of KIBCA and landowners succeeding in their claim is quite high.

The Judge in his ruling stated, “The concern of the applicants is the protection of the environment and the land on which their people depend for livelihood. Financial considerations must not be allowed to override the need to preserve the environment, especially when there is strong evidence to show that the process, which led to the granting of the logging licence, is tainted with irregularities”.

On hearing the High court judgment KIBCA coordinator Ferguson Vaghi expressed his satisfaction with the Court process and judgment.

“The majority of people who did not support this logging operation are very happy. It is a win for the community” said Mr. Vaghi

Mr. Vaghi added that Eco-system services are the fabric of our societies; it is a symbol of value and power. Unlike the western societies that depends on money as the basis of power and values, we depend on our resources for almost everything in life. So much so that even if we don’t have money we can still survive. An issue that surprises westerners.

Mr. Vaghi further added that it is important that logging companies and the government departments that deal with logging applications and approvals carry out their functions in accordance with the law.

“It is time for the government ministries to act and do their job. To make sure that legal processes are followed and that they support landowners rights” said Mr. Vaghi.

The arrival of the logging company on Kolombangara in August was met with strong opposition from landowners and the community. The landowners allege that the logging barge arrived accompanied by a large security force as well as police officers.

In an early morning operation police from Gizo travelled to Vavanga and arrested and took into custody seven local men who opposed the logging operation. The police action was in relation to an incident where the logging company claimed landowners stood in front of earth moving machinery and threw rocks and sticks at the machinery as it tried to advance. These charges were later withdrawn.

A village leader at Vavanga spoke out against the logging operations that have divided the community and resulted in intra tribal and family in-fighting.

“This logging business is not only destroying our resources but also our community. The large majority of community members do not want destructive logging activities on their lands.

The leader stated that deals are being made between the logging company and people who have no clear post logging plan.

“Self-appointed leaders are negotiating with the logging company for their personal advantage, and control of royalty payments.”

A woman from Vavanga who was with a group of women and children who attempted to block the path of the logging machinery to prevent further clearing said the company must leave.

“We do not want to see our forests destroyed, our water and gardens ruined, our soils washed into the sea. There are no benefits to the local communities, only more problems.It is time for this to stop”.

Following the granting of the injunction KIBCA and landowners filed and served a judicial review claim challenging the validity of the decision of the Commissioner of Forests to issue the felling licence. A response from the Attorney General (on behalf of the commissioner of forests) is pending. The matter will then go through a pre trial process and be listed for hearing.

A community member from Vavanga said that the days of watching the company come and do what it wants are over. “We will stand up and fight for our rights”.

Kolombangara Island is one the Solomon Islands most important natural areas. Its spectacular scenery, vast mountain cloud forests and beautiful wildlife attract many international tourists each year.Renewed logging will destroy the habitat of some of the Solomon Islands rarest plants and animals and home for all the indigenous Ndughore people.