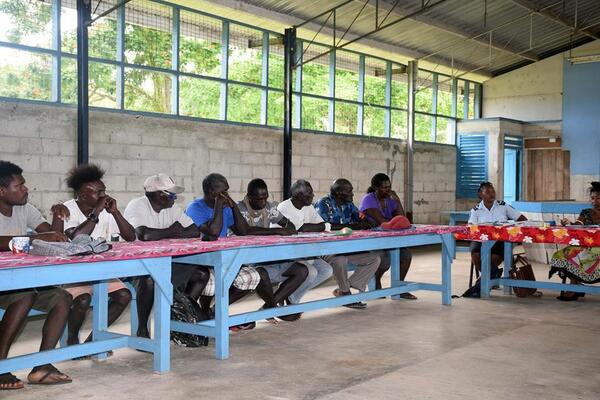 Officers of the Royal Solomon Islands Police Force (RSIPF) have visited 16 communities in Shortland Islands as part of community engagement with the people of Shortland Islands in preparation to provide security during the Bougainville Referendum that will be occur on 23 November 2019.

Police Forward Command Post (PFCP) Commander at Kulitanai and Provincial Police Commander (PPC) Western Province, Chief Superintendent Mathias Lenialu says, “Police, Immigration and Customs officers have visited 16 communities from Alu, Fauro and Mono in the Shortlands. The response from the community leaders and their people have been very positive.”

Chief Superintendent Lenialu explains: “During the community visits Immigration and Customs officers were also able to respond to some questions raised by members of the communities on the issue of border crossing. The common border between Solomon Island and Papua New Guinea is not closed. We are here to monitor, control and facilitate movements during the Bougainville Referendum. ”

“I want to remind my good people of the Shortland Islands that heavy police presence on their islands from Honiara, Gizo and Taro is part of the assistance to the officers at Kulitanai to provide security in our communities. But we will focus on Operation Bougainville Referendum from 23 November to 7 December 2019.”

Chief Superintendent Lenialu says, “I want to ask people in the Shortland Islands and parts of Choiseul not to panic when they see the heavy presence of police in their communities. Police are there to provide security for our people during the Bougainville Referendum.”

“I call on my good people in Shortland Islands to work together with the police to address issues in our communities.”

Chief Bakile from Maleai says, “We are happy to see more police officers presence during the Bougainville Referendum. My people feel very safe and are able to move around freely. We will assist police with information that will help police to do its work.”