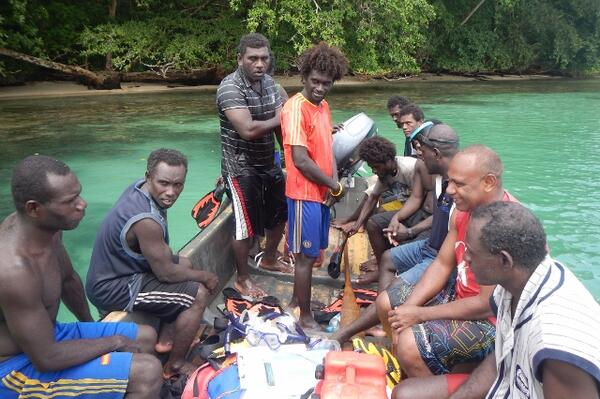 The training was for community monitors to carry out simple Biological Monitoring Surveys at the community level in accordance with Solomon Islands Locally Managed Marine Areas Network protocols.
Source: The Nature Conservancy
Share
Wednesday, 20 August 2014 07:04 AM

Katupika communities have created what is thought to be the biggest network of marine reserves in Choiseul Province, Solomon Islands following the addition of four new sites to existing Managed Marine Areas governed by the Lauru Land Conference of Tribal Communities.

The new areas are Kukuru, Malanguni, Tarapae and Karago. All these sites are in the south east of the province and are owned by different clans. However, each comes from the same Volekana ‘mother tribe’.

This month a team consisting of three conservation practitioners from The Nature Conservancy (TNC) made a 10-day trip to Katupika communities in south east Choiseul to conduct training for 18 biological monitors from the villages of Ruruvai, Pututu, Posarae, Ropa, Kelekaku, and Lituni.

The Community Based Resource Management (CBRM) training was fully funded by Australian Aid and implemented by TNC. The objective of the 10 days was to conduct two days of training for community monitors on how to carry out simple Biological Monitoring Surveys at the community level in accordance with Solomon Islands Locally Managed Marine Areas Network protocols.

The survey looked at three components: coral reef cover, invertebrates and fish monitoring. The remaining eight days were for field activities within the new sites.
The workshop took place at Posarae community, South East Choiseul on 29-30 July and the survey was carried out in the Roboroe and Boboe areas. During the first two days of training held at the community hall, participants learned about marine monitoring methods and protocols, and participatory learning approaches. The activity was later followed by awareness raising for the entire community on conservation, climate change and natural disasters.

Site monitoring was also conducted at new Marine Managed Area (MMA) sites proposed by the local communities around Roboroe Island. According to Kenton Madada from Ruruvai village, “It is a great privilege for me to acquire information about our marine resources and monitoring these in a professional way. I know it can cost a lot of money to acquire this type of knowledge, but for us it’s all free.”
Another participant, Watson Pitakoe, said the training was more than just about monitoring coral reefs: “It also gives me an opportunity to learn how to conduct a mathematical analysis of the results obtained from surveys.”

Choiseul-based TNC staff member, Jimmy Kereseka told participants: “What you have learnt during the course is simple but vital science. You are now professionals in your area and by sharing your knowledge with the wider community, you will end up learning more than what we have managed to show you during the training.”

Arnavon Islands coordinator, Henry Kaniki helped conduct the training with TNC. He said surveys of the marine resources showed that the new sits are still in pristine condition.

"The data collected shows there are abundant invertebrates, fish and healthy corals. Even more exciting was the capture of a juvenile Hawksbill turtle for the first time during a fish survey at Kukuru Marine Managed Area."

“There is normally very little opportunity to catch a turtle at a depth of less than 4m in the middle of the day. There were also different types of clamshells and commercial invertebrates found,” he said.