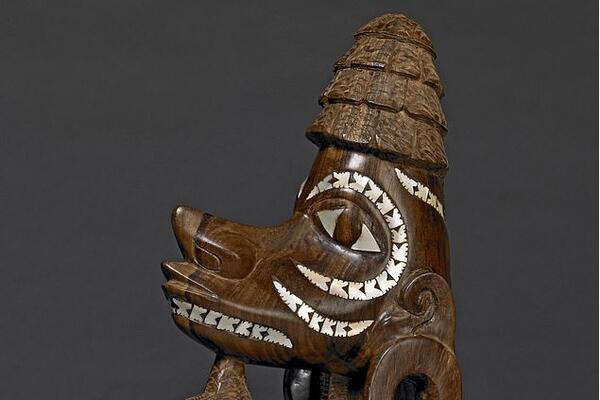 This figure-head (nguzunguzu) of wood with pearl shell inlay from the Solomon Islands will also feature in the exhibition. The British Museum has museum long faced criticism over how it sourced its most prized possessions from former British colonies and beyond.
Source: The Trustees of the British Museum
Share
Friday, 21 June 2019 09:54 AM

The British Museum has one of the world's largest collections of objects and photographs from Solomon Islands - around 4,000 items - which have been acquired in a variety of ways over the past 250 years.

A new display opening today, explores some of the colonial relationships which led to a number of these important objects arriving at the British Museum.

The Asahi Shimbun Displays Collecting histories: Solomon Islands focusses on how five objects from Solomon Islands came to be in the British Museum's collection in London. They have been chosen to each represent a key aspect or consequence of colonialism that ultimately led to their acquisition.

These interactions include the activities of colonial officials and Christian missionaries, as well as the development of a new economy post-independence. The display has been created in consultation with Solomon Islanders who live in the UK.

The five objects on show arrived at the British Museum over a one-hundred year period, from the early 20th century to the early 21st century. They include a figure of an ancestor taken in 1891 from a shrine by the captain of HMS Royalist during an attempt to impose colonial authority on communities in Roviana, and later sold by him to the British Museum; a 'bird net' float used to catch fish which was given to a missionary in 1903 who regarded it as a trophy in his campaign against the religion of the Islanders; and a string of shell-money presented to HRH the Duke of Gloucester in 1978 during independence celebrations. The display is supplemented by archival and contemporary photography.

The Asahi Shimbun Displays Collecting histories: Solomon Islands will help the British Museum explore how it could better tell the stories behind the acquisition of objects in its collection, including in its permanent galleries and for future major exhibitions. With 8 million objects in the Museum's collection - from the UK and across the globe, and from the ancient world to the modern-day - there are many nuanced and diverse ways in which items were, and are, acquired.

Hartwig Fischer, Director of the British Museum, said: “The British Museum has always actively researched its collection, and it continues to do so to better understand how we should present collecting histories for our visitors. The Asahi Shimbun Displays Collecting Histories: Solomon Islands allows us to test out ideas that will inform what we will do in the future."

The British Museum has strong links to Solomon Islands today. It is a country in the southwest Pacific and consists of six major islands and many smaller ones, and is home to about 80 local ethnic groups. The islands have been inhabited for thousands of years, and the first European to visit them was Spanish navigator lvaro de Menda a who arrived in 1568.

The islands were claimed by Britain as the British Solomon Islands Protectorate in the 1890s. During the 20th century, colonial government, plantation businesses and Christian missions transformed Solomon Islands, shaping a country that became independent in 1978 and joined the Commonwealth.