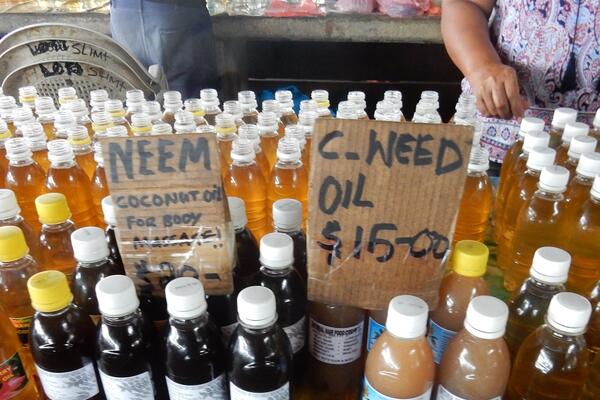 “Coconut oil saved me, gave me a future I never thought was possible, my children are in school, and I can look after them well,” Linda said, now beaming with pride at what she has achieved.
Source: STO
By Caleb Gray
Share
Friday, 14 June 2019 07:50 AM

Linda first came to Honiara in the early 1980s, 14 at the time she was just excited to visit the capital city.

“I came to Honiara with my aunty who was a nurse at the time, she thought I should attend schooling in Honiara because my village was far from the nearest school…so it was very difficult for me to attend school,” Linda, now in her mid-50s, recalls.

She said that school was fun, but her aunty could not afford to keep her in school.

“She also had three other children, so although she did not tell me to leave school I told her I will find a job, I remember she smiled, I think because I was just 17, so maybe she thought I was not serious.

“I started off selling cabbage from our small garden and there was this shop I used to always go to because the old lady was very friendly, I think she felt sorry for me because after some time she asked me to be a shop keeper,” Linda said, looking upwards, sighed and kept going.

“I stayed at that shop for fifteen years, and I got married, had two boys, they were still quite young when my husband passed away.

“Around the same time the shop owners decided to leave when their shop was burnt during the April riots, I was so sad.

“The couple gave me SB$2000 before they left the country, that day I walked from the shop to the market just thinking about how my children and I will survive,” Linda recalled, looking sad, but seemed determined to complete her story.

She said she spent most of the afternoon at the market, looking at various produce and what people were selling. What got her excited were the scented coconut oils, selling price was good and it seemed easy to make.

“I just opened the different coconut oils and compared them, some had nice scent, one had some plant, and I remember it was the nim plant, and I was just excited because I thought to myself I could make this and sell.

“But it was not that easy, my first few attempt to boil the coconut extract to get the oil was not successful, it was also hard to get a good supply of coconut fruits,” Lind said with a smile.

After some time she decided to seek advice from some of the market vendors, who, to her surprise, were very helpful.

“They told me to just buy the coconut oil from Solomon soap and add scents and any other natural things and re-sell it at the market.

“And from then on I never looked back I started small but grew slowly, and eventually became one of the bigger scented oil seller at the market,” Linda said, but now with some excitement.

She says that she now supplies some of the market vendors and a few shops in town. She now owns a house, bought one bus that services East Guadalcanal and started a big piggery farm.

“Coconut oil saved me, gave me a future I never thought was possible, my children are in school, and I can look after them well,” Linda said, now beaming with pride at what she has achieved.

Linda said her success came from self-discipline, managing her money well and always setting a target for what she earns.

She said that sometimes people think it is too difficult, “people fear trying something new but my story shows that it is possible.”