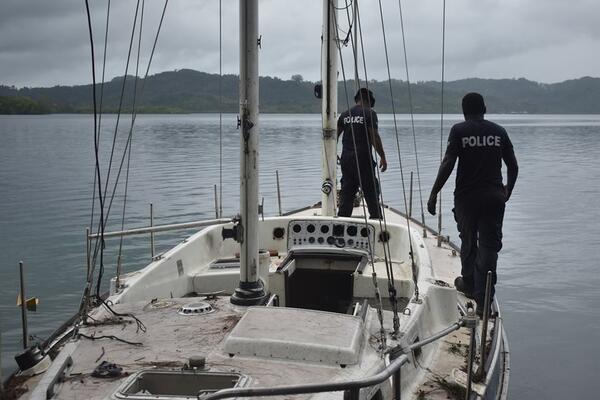 The yacht was destroyed at sea between Ngela and Guadalcanal.
Source: Supplied
Share
Thursday, 16 January 2020 12:09 PM

Officers of the Royal Solomon Island Police Force (RSIPF) destroyed the 12-meter two-masted yacht 'Vieux Malin' yesterday, confiscated in September 2018 in an operation sting that discovered 500 kilograms of the illegal drug cocaine in the yacht off Honiara.

RSIPF Acting Commissioner Mostyn Mangau says, “The yacht was carrying the 500 kilograms of cocaine destined for Australia when it was discovered in Solomon Islands in a joint operation between the RSIPF and the Australian Federal Police (AFP) in September 2018."

Acting Commissioner Mangau explains: "The destruction of the vessel was done at a disclosed location approximately five miles offshore at a depth of 372 meters. The yacht was fully stripped of any fuel or contaminants which could cause damage to the environment prior to sinking."

Mr Mangau explain: “Explosive Ordnance Disposal (EOD)Team of RSIPF destroy the boat and they apply a small portion of explosive to blast three holes inside the boat to allow water access to go in and sink the yacht. The explosive are safely well-structured to avoid full boat destruction and avoid any side effect on marine eco-system during the time of explosion.”

The Acting Commissioner of Police thanks the Comptroller of Customs for authorising the destruction of the yacht and as well as all RSIPF officers and SIPDP advisors who were involved in the successful operation.

The 500 kilograms of cocaine discovered in the yacht were destroyed in Honiara last year.