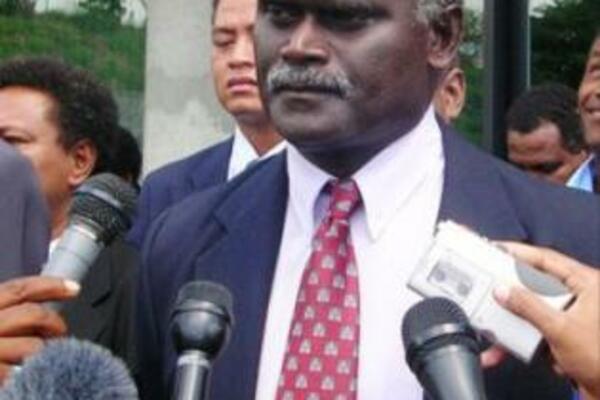 Mr Sogavare says the country is in danger of having a government that is nothing more than a collection of "groups of convenience."
Source: STO Archives
Share
Thursday, 19 August 2010 09:06 AM

Manasseh Sogavare, the former Opposition Leader and current Leader of OUR Party, says members of the ninth Parliament are repeating the weakness of past parliaments in the formation of a new government.

"It is unfortunate that personal egos of individuals along with outside influences are stopping Parliament the freedom to seek out the best policies for the country and to choose quality leadership," he said.

Mr Sogavare says the country is in danger of having a government that is nothing more than a collection of "groups of convenience," who have very little concern for the national interests of Solomon Islands.

The former opposition leader confirms that members of his party - the Ownership Unity and Responsibility, OUR party are part of the Pacific Casino political group.

He also confirms the group is merging with the other political groups in camp at the Mendana Hotel and the Honiara Hotel.

Asked if he would consider a nomination for the election of prime minister, Mr Sogavare says it is not a decision for him to make, but he's keeping his options open.

"The option is open - if the opportunity comes my way, I would be happy to take on the offer. But, that's not a matter for me to decide on. I'm part of a group, and I will respect the decision of the group on that matter."

Mr Sogavare says in the absence of a comprehensive electoral reform to direct the focus of elections to policies and political parties, it would be misleading for any political party to claim it had the mandate of the people to run the next government.