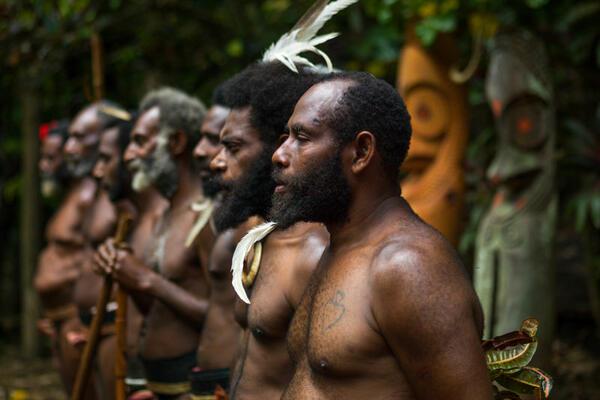 When they arrived in Vanuatu, they carried some Papuan ancestry but still spoke languages from a linguistic family common in the islands of southeast Asia, called Austronesian.
Source: Eric Lafforgue/Art In All Of Us/Corbis/Getty
Share
Friday, 02 March 2018 09:39 AM

Genomic studies provide details about the complex peopling of Vanuatu — one of the last places on Earth reached by humans.

Two ancient-DNA studies are unravelling the complex sequence of human migrations that left remote islands in the Pacific with a rare linguistic and genetic disconnect.

Vanuatu — an 80-island archipelago strewn across 1,300 kilometres of the southern Pacific Ocean — was one of the final pockets of the planet to be reached by humans, with its first inhabitants arriving only 3,000 years ago. For more than a century, researchers have puzzled over why its inhabitants speak languages rooted in southeast Asia, but trace most of their genetic ancestry to what is now Papua New Guinea, which has its own distinct languages. The genomic studies1,2 now suggest that a series of population replacements on the islands led to this unusual situation.

Until recently, one explanation for the islands’ language and genetic mismatch had been that the first people who settled Vanuatu and the rest of remote Oceania were from a seafaring culture known as the Lapita, who traced their ancestry back to Taiwan but emerged through what is present-day Papua New Guinea. When they arrived in Vanuatu, they carried some Papuan ancestry but still spoke languages from a linguistic family common in the islands of southeast Asia, called Austronesian. But ancient genomes from some of Vanuatu’s first settlers, published in 20163, scotched that theory. The archipelago’s earliest inhabitants carried little Papuan ancestry. This discovery posed an obvious question: when did Papuans get to Vanuatu?

The two latest studies — published in Current Biology1 and Nature Ecology & Evolution2 — build on that work to illuminate the next chapter of Vanuatu’s human history. The islands’ first settlers had roots in Taiwan, the studies agree. The teams used similar genetic data sets — sequences from around a dozen ancient inhabitants of the islands of Vanuatu and the surrounding region — to conclude that those first settlers were soon joined by people of almost entirely Papuan ancestry, around 2,500 years ago. They also found that later ancient inhabitants had predominantly Papuan genetics but also carried a small portion of Austronesian ancestry, similar to present-day Vanuatuans.

The teams differ in their interpretation of this pattern. One group, led by population geneticist David Reich at Harvard Medical School in Boston, Massachusetts, asserts1 that the Papuans rapidly overran the existing settlers. The researchers interpret the presence of a roughly 2,300-year-old individual of almost total Papuan ancestry as proof of a near-complete population replacement, at least on the island where the remains were found. Reich speculates that people descended from the first Vanuatuans retreated to pockets of the archipelago and later mixed with the Papuan émigrés.

By contrast, a team co-led by Cosimo Posth, a palaeogeneticist at the Max Planck Institute for the Science of Human History in Jena, Germany, argues2 that a steady trickle of people from Papua mixed with the earlier inhabitants. “There wasn’t this huge boom, and the Papuans came in and killed off everyone,” says team member Heidi Colleran, an anthropologist at the same institute. The researchers say that modern linguistic features in Vanuatu support their hypothesis: the languages, although Austronesian, bear some minor Papuan attributes, including what’s known as a bilabial trill, a ‘bwwww’ sound inserted into the middle of words. Furthermore, men of some groups in Vanuatu traditionally don penis sheaths, a practice also seen in Papua New Guinea.

Linguist Andrew Pauley, at the Australian National University in Canberra, is sceptical of that explanation. Not all linguists agree that Vanuatu’s languages harbour Papuan features, he says. Peter Sheppard, an archaeologist at the University of Auckland in New Zealand, says it’s also possible that the first people who settled Vanuatu spoke both Austronesian and non-Austronesian languages, as a result of earlier interactions.

And Mark Stoneking, a geneticist at the Max Planck Institute for Evolutionary Anthropology in Leipzig, Germany, thinks there are still too few data to rule out the possibility that some of the first Vanuatuans had Papuan ancestry. “People tend to over-interpret things a little bit because it’s so exciting to have ancient DNA from this part of world,” he says. Once more genomes from the region have been sequenced, the picture is sure to grow still more complicated, he says.

More such clues are emerging. Reich’s team discovered hints that Papuan ancestry found on Polynesian islands west of Vanuatu came from yet another source. “There’s very clear evidence of not one, not two, but at least three big eastward migrations from the big islands in Indonesia and New Guinea,” Reich says. “This is only the tip of the iceberg.”