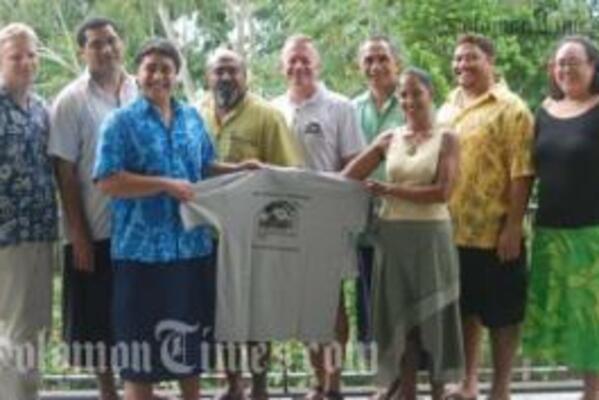 Press Release - Dealing with climate change in the Pacific is everyone's business. This is the message of the 2009 Pacific Year of Climate Change being led by the Secretariat of the Pacific Regional Environment Programme (SPREP).

The overarching theme for the Year, "Our Century's Challenge, our Pacific response," highlights the fact that Pacific people and nations cannot rely on others but need to work together if we are to address the challenge of living with a changing climate.

"Climate change is a threat which will impact on everyone, the region as a whole, the different island nations and within our Pacific communities. One of the aims of the 2009 Campaign is to promote urgent and immediate action on planning for adaptation to climate change," said SPREP's Climate Change Adviser, Espen Ronneberg.

"The Pacific Year of Climate Change gives us the opportunity to focus on the climate change challenges that are faced by the region," Ronneberg said.

"But most importantly we will also seek to showcase the opportunities and possibilities that are available to the region to take meaningful action on climate change - both in terms of mitigation and adaptation."

In December this year, the United Nations Framework for the Convention on Climate Change will hold its 15th Conference of the Parties (COP 15) at which countries hope to agree on a new direction for the international response to climate change, and to set new commitments that will come into force when the current commitments under the Kyoto Protocol expire in 2012.

The Pacific Year of Climate Change will serve to help the region prepare for COP15 by raising awareness at the international level about the need to support adaptation to climate change in the region and mitigation of climate change globally and the need to reflect these concerns in the outcome documents of the COP15.

The Pacific region has embarked on a regional renewable energy project that will reduce carbon dioxide emissions from burning of fossil fuels by 33% by 2015. Currently, the region contributes less than 0.03% to the global emissions of greenhouse gases.

"These most vulnerable countries are leading by example even if they are the least responsible for causing the climate change problem," Ronneberg explained.

Partnerships with Pacific governments, communities, non-governmental organisations and the general public will help ensure the campaign is successful. A number of Pacific members of SPREP have already put into action activities as part of the 2009 Pacific Year of Climate Change.

The Solomon Islands was the fist country in the region to launch the Pacific Year of Climate Change on World Meteorology Day, 23 March in Honiara. The Minister of Environment, Conservation and Meteorology, Gordon Darcy Lilo, launched the year and outlined how the campaign will see stronger steps taken to advocate adaptation to climate change.

On the other side of the Pacific, in the Cook Islands, the National Environment Service will focus their National Environment Week around the Year of Climate Change with a range of different activities including a student speech competition on climate change. The winning student will have the opportunity to travel with the Cook Islands delegation to the COP15 in Copenhagen in December.

There is obvious strong commitment by SPREP members to achieve the objectives they set for the Pacific Year of Climate Change. As the Year gains momentum at the national level, it is clear that our century's challenge is being taken seriously and that the Pacific can work together to develop sound responses to the potential climate change crisis.