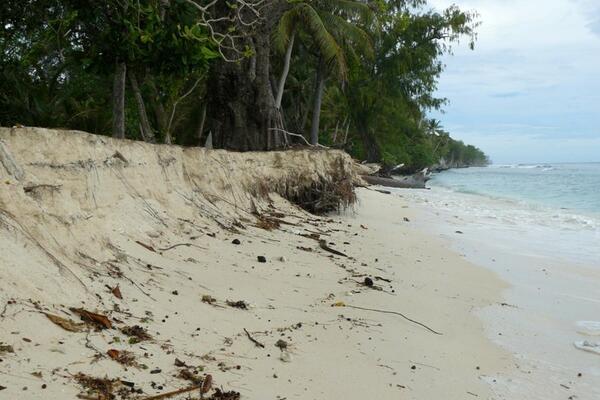 Sophisticated Satellite technology is now being used to track the impacts of climate change in one of the country’s most successful marine reserves.

The on-going programme was launched on October 20 with a three-day training session for eight Arnavon Islands conservation officers and three members of Isabel Mothers Union.

The training was conducted by Dr Simon Albert and Dr Javier Leon, both from the University of Queensland. The pair were contracted to undertake the training and supply GPS equipment by The Nature Conservancy (TNC) Solomon Islands using AusAidClimate Change funding.

The Solomon Islands has experienced some of the highest climate change-related sea level rise in the world with a 16cm increase in mean sea levels recorded since 1996. Currently, sea levels are rising by 8-10mm per year in the region. The global average is 3mm per year.

This increase can devastate low-lying sand islands like the Arnavons that are less than a metre above the high tide mark. Even small increases in sea level can lead to severe beach erosion threatening reef fish habitats and nesting sites of critically endangered sea turtles such as the hawksbill. Arnavon Islandsconservation officers have already reported serious beach erosion in recent years.

Dr Albert says the first task for TNC is to accurately measure and record changes to the beaches. This is done using GPS equipment that can precisely pinpoint the more than 20 reference points down to the nearest centimetre. Conservation officers will repeat these measurements every two weeks to build up a complete picture of beach erosion.

“There is little we can do to prevent sea-level rise at a local level, but we can prepare ourselves by buildingwhat we know about beach erosion into the way we manage reefs and beaches. For example, we should not build near eroding beaches and we can change the way we fish the reefs to help species cope with climate change.”

The Arnavon Islands were protected by three communities – Kia, Katupika and Wagina – with the help of TNC 18 years ago. It was the first marine protected area in the Pacific and has since become famous for its abundant fish life and the high number of critically endangered hawksbill turtles nesting on its beaches.