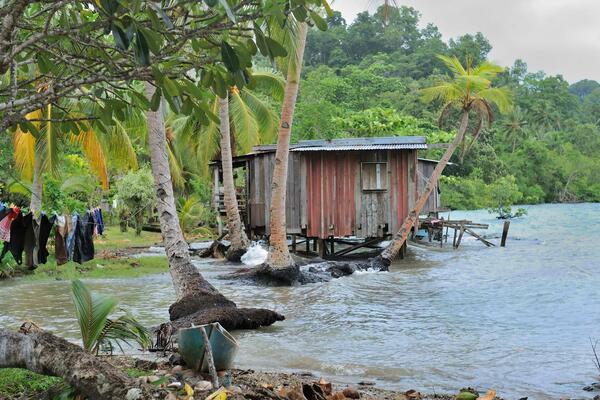 Today, a number of locations within the Solomon Islands are facing immediate and direct climate change impacts such as sea-level rise and food and water insecurity.
Source: uib.no
Share
Wednesday, 06 November 2019 07:57 AM

Meaningful engagement with the social and conflict implications of climate change in Solomon Islands must be firmly grounded within local worldviews—within Solomon Islanders’ physical, economic, political, and social and spiritual worlds.

As we note in a recent policy brief for the Toda Peace Institute, when addressing conflict challenges exacerbated or caused by climate change, approaches should be draw upon community understandings of what constitutes peace and justice.

Their continued survival through years of colonialism, capitalism, religious missions, war, and conflict testify to Solomon Islanders’ adaptive capacity. Many island communities continue to draw upon a combination of indigenous and introduced practices to adapt to such changes, including those exacerbated by current rapid environmental change.

When considering the conflict impacts of climate change and the potential opportunities for peacebuilding, it is important to take these local adaptive capacities seriously and recognize the ways in which local leaders employ locally embedded “everyday peacebuilding” mechanisms in their communities. At the same time, communities continue to interact with the modern institutions surrounding them, mixing indigenous and introduced practices to achieve relative peace and stability at the community level.

Given climate change’s significant impact upon rural livelihoods and internal migration and therefore with associated conflict drivers, how do governments, civil society, policymakers, and external actors help prevent and mitigate conflict in ways that recognize and align with the worldviews of community members? And how can outsiders draw upon local adaptive capacities and avoid creating conflict over the delivery of external forms of aid and development?

Among the six key recommendations we make, first, we suggest that communities need to be supported with dialogue that acknowledges the many dimensions of social life which intersect with climate change—including spiritual, relational, political, economic dimensions. Second, existing local institutions should be used to align external approaches with local adaptive capacity. This means it’s better to avoid establishing new adaptation or disaster project committees at the community level. Instead it is better to engage with local institutions such as churches, chiefly leadership, elders and other customary forms of leadership, women, youth representatives, and local service providers such as teachers and health workers, in order to ground approaches within existing structures and avoid creating conflict, which is often associated with externally-introduced projects.

Today, a number of locations within the Solomon Islands are facing immediate and direct climate change impacts such as sea-level rise and food and water insecurity. Climate change may exacerbate existing drivers of conflict across the country. These include the management of land and resources, which are also tied to conflict legacies and intergenerational trauma associated with the civil conflict that took place from 1998 to 2003. While it is a mistake to make direct links between current conflict drivers in Solomon Islands and the impacts of climate change, it is also a mistake to ignore how rapidly changing physical environments in Solomon Islands could erode peace and stability in community life, particularly where climate change impacts add stresses to the environment, or result in relocation.

Local leadership is one key factor that impacts a community’s capacity to adapt to the effects of climate change, particularly given the slow speed and relatively limited capacity of government responses. For example, in the villages of East Kwaio in Malaita province local innovations in adaptation efforts to combat sea-level rise bring together indigenous leadership practices and knowledge of the natural environment as well as leadership from influential community members working in the health center. In another example, in the Western Province, indigenous leadership has helped to maintain fish catches, despite evidence of declining fish stocks due to climatic change, by changing the methods and/or the locations where community members fish.

A second factor is the way that Christianity is practiced. The vast majority of Solomon Islanders are devout Christians. Hence, Christianity is a powerful force across Solomon Islands, although it informs different attitudes towards climate change. For example, in one village in Western Province, church leaders argue they are protected from climate change, as their village is a historically important Christian site. Conversely, members of the church in Ontong Java—low lying Polynesian atolls facing relocation in the north of the country—are actively speaking about climate change, running adaptation programs, and attempting to mediate national conversations about the need to relocate.

A third key factor is different community members’ perceptions of what climate change is. While the academic and policy worlds understand the problem to be a technical one, explained by scientific evidence, it is likely that villagers comprehend changing environments in a far more holistic sense. Local cosmologies—beliefs relating to the origins and future of the world— are likely to form the foundation within which such perceptions sit. Therefore, conflict-sensitive strategies that aim to address issues of climate change adaptation must not only incorporate, but also respect and value community perceptions of environmental change, rather than solely understanding it as solely scientific.

Fourth, externally-led secular adaptation projects, standardized solutions and short project-cycles often do not give external actors (including locally engaged staff and volunteers) enough time to walk alongside community members throughout the project processes. This omission can lead to a failure to understand the complexity of contexts and conflict dynamics within each community. It also may reinforce the erroneous idea that outsiders alone have the solutions to fix the problems arising from climate change impacts. This effect in turn can easily create dependency on outsiders—referred to throughout Solomon Islands as a “hand-out mentality.”

To avoid these negative effects—which themselves may lead to conflict—and to achieve a broad consensus about the need to prevent conflict and how to do this, we recommend an inclusive approach that takes local perspectives and knowledge into account. Rather than seeing state institutions and external actors as both solely responsible for, or able to, “fix” conflict effects, a focus on the relationship between communities and external actors is needed. This will allow approaches that seek to address conflict challenges exacerbated or caused by climate change to be centered within community understandings of what constitutes peace and justice.

Source:This article, by Kate Higgins and Josiah Maesua, is based on a Toda Peace Institute Policy Brief, “Climate change, Conflict and Peacebuilding in Solomon Islands.” https://www.newsecuritybeat.org/