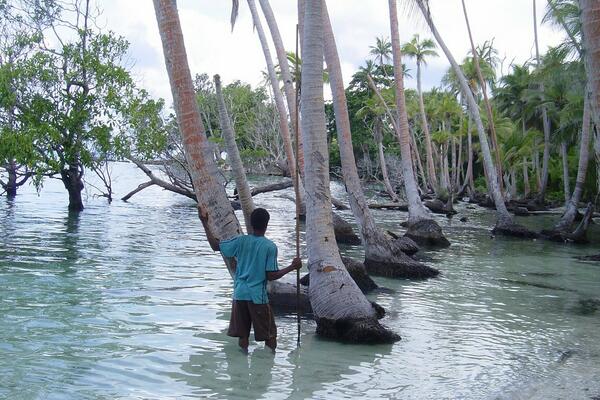 The sinking islands of Oceania have become a symbol for the severe and unprecedented consequences of man-made global warming.
Source: SPREP
Share
Thursday, 03 October 2019 07:19 AM

Considering how vulnerable Pacific Island countries (PIC) are to the conflict-prone effects of climate change, it is surprising that so little attention has been focused on the region.

To address the conflict potential of the effects of climate change, as well as of adaptation and mitigation policies and technologies, policymakers must draw upon research related to the climate change-conflict nexus that thus far have been widely ignored or underestimated.

These include cultural and spiritual aspects, indigenous knowledge, and indigenous ways of adapting to climate change. To fill gaps in knowledge, more granular ethnographic research should explore the complexity of local contexts in Oceania. Non-Western, non-anthropocentric concepts warrant particular attention.

The sinking islands of Oceania have become a symbol for the severe and unprecedented consequences of man-made global warming. As I note in the Toda Peace Institute policy brief this post is based on, many of the islands face extreme exposure and rather limited options for adaptation.

Notable examples include some outer islands of Malaita, a province of the independent state of the Solomon Islands. People have started to relocate to mainland Malaita as islands become uninhabitable due to sea-level rise and its effects. Low-lying atoll countries, such as Tuvalu, Kiribati, or the Marshall Islands, are particularly vulnerable to vanishing.

Climate-induced migration and its connection to conflict varies. In Papua New Guinea, for example, ongoing planned climate change-induced relocation from the islands of the Carterets atoll to the main island of Bougainville has been a relatively successful exercise. However, disputes over land have led to the re-relocation of some Carterets islanders back to their islands. And people from another Carterets relocation site on the island of Buka report conflict with the host community over land use and fishing rights. Migrants’ homes and food gardens have been destroyed. And young migrants have been attacked and women raped.

This is not an isolated case in the region. Localized violent conflicts occur not only in urban settlements, which are often the destination of unplanned climate change-induced migration, but also on the home islands themselves. Conflicts over scarce natural resources, particularly land, emerge, for example, between people moving from the coast to higher ground and the people already living there. In Kiribati, water scarcity has led to conflicts between neighboring communities forced to encroach on each other’s land.

In overcrowded squatter settlements in the few urban centers in the Pacific Islands, domestic violence is increasing. These settlements are also often the sites of violent, sometimes deadly, conflicts between communities from different islands, many of whose members left their home islands because of the effects of climate change.

In fragile post-conflict environments, such as in Bougainville or Solomon Islands, climate change is a “threat multiplier,” and climate-induced migration, as well as other effects of climate change, can lead to conflict escalation, particularly in resettlement areas. When reflecting on pathways to conflict escalation, however, we must note all the factors at play, in particular the importance of institutions and quality of governance.

The potential of climate change-induced conflicts to become violent may depend primarily on four variables:

The gravity and urgency of the climate change-induced environmental degradation;
The vulnerability and adaptive capacity of affected communities (what are the options to adapt, to change lifestyles, or to relocate?); The capacity and willingness to use violence as a means to engage in conflict and to “solve” problems; and
The fragility or stability of the societal and political context.

Whereas the first point lies beyond the reach of political intervention (at least in the local context), the other points can be addressed through conflict-preventive and conflict-sensitive policies. This means that good climate change governance takes into account issues of weakness and fragility or strength and stability facing the state.

In countries like the PICs, good climate change governance and adaptation planning must also take into account the importance of traditional indigenous actors and institutions. Traditional authorities—chiefs and elders, tribal leaders, religious authorities, healers, big men, and wise women—manage community governance, natural resources, and the environment. They regulate resource use and resolve disputes according to local custom. For example, they may use traditional forms of reconciliation or traditional “taboo” to regulate and restrict resource use with “no-take” zones. Hence communities’ adaptive capacity to a large extent rests with such customary actors and institutions.

In Pacific Island countries, the churches can act as bridging organizations connecting local customary life-worlds and the outside world of state and international climate change policies. The vast majority of Pacific Islanders are devout Christians. While state institutions might not reach far beyond the urban centers, the churches are everywhere on the ground. It therefore is of utmost importance to include them in climate change adaptation and governance.

To be successful in the PIC context, climate change governance and adaptation planning should also take into account indigenous cosmologies and world views. In Oceania, human beings are seen not as isolated individuals, but as members of communities, defined through their relationships with other human beings as well as with actors beyond the human sphere, in nature and the spirit world. Any community in Melanesia is understood in a holistic cosmic way to include people, land, ocean, ancestors, spirits, trees, villages, animals, language, mountains, and God.

Consequently, the environment or the climate cannot be understood as separate from people, society, and the sacred—but as cosmologically connected. This worldview has far-reaching consequences for the study of climate change adaptation and governance, conflict prevention, and peacebuilding, in the context of PIC.