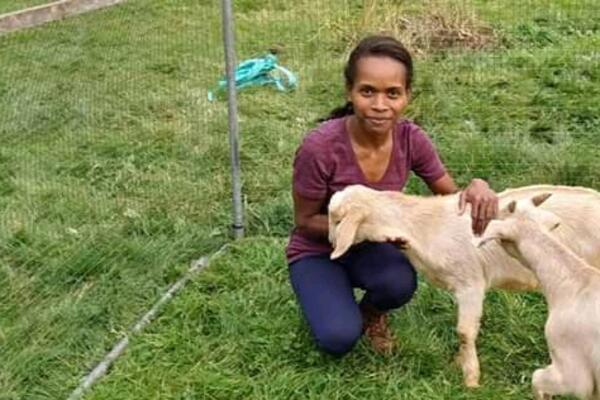 She says joining the CITREC program to work in Canada has good returns, but it really depends in the area of expertise or work. Not in Agriculture.
Source: Supplied
By Jimmy Nolan
Share
Wednesday, 15 July 2020 08:44 AM

A young female from Guadalcanal under the Canadian labour Mobility scheme claimed she was unable to complete her contract due to hard labour.

Isabella Roro with two others left in December 2018 to work in the Agriculture sector in Langley British Columbia, Canada.

Roro says she worked on a farm that mostly deals with fruit picking and packing.

“This is totally different from what we were taught before we went to Canada. In our training we were trained how to mix chemicals and other stuff. But in Canada the job we do is different. I work mostly in a factory packing fruits. I work 8-9 hours daily and on the weekend I do private work’’.

Roro has a Diploma in Agriculture Applied Science from the Solomon Islands National University (SINU). She decided to join the CITREC program after hearing good stories from different people about the Labour Mobility.

“People say you will come back with good money if you work in Canada. But for me this is not true because compared to the work I did and the salary I received, most earnings were spent on bills. I only managed to save a small amount of money”, she says.

She says joining the CITREC program to work in Canada has good returns, but it really depends in the area of expertise or work. Not in Agriculture.

Under their temporary foreign workers (TFW) permit, Roro should be entitled to 30 minutes break time per day, two days off per week and can take two weeks or 10 days of paid vacation.

Also her employer should provide her with accommodation but she has a choice to rent her own house.

The employer shall pay all taxes as prescribed by Canadian laws, including but not limited to employment insurance, Canadian income tax, Canadian pension plan or the Quebec pension plan.

The employer shall also cover for health insurance and workplace safety insurance at no cost to the employee.

CITREC has often assured the government that its workers are well protected under relevant national and provincial laws and regulations in Canada.

In the initial signing of agreement for the program between CITREC and Guadalcanal, CITREC Chairman says the salaries expected to be earned by the workers are between SBD$97 to SBD$103 for an hour or at most CAD$15 to CAD$17.

A number of Guadalcanal people are currently working in different sectors in Canada.