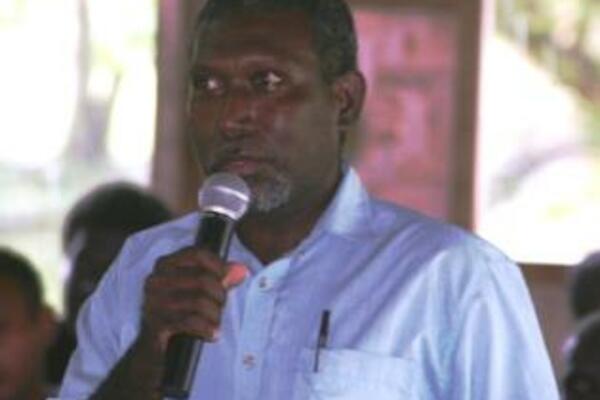 Choiseul Premier Jackson Kiloe said his people were happy to be consulted on the bill because it will affect everyone from the top to the bottom of our political system.
Source: Photo Supplied
Share
Monday, 21 September 2009 07:00 AM

Leaders and people of Choiseul Province have openly expressed support towards the Political Party Integrity (PPI) Bill during a two-day consultation process in Taro over the weekend.

A Government Working Committee on the bill headed by Chairman, John Keniapisia, traveled to Taro where they held two public consultations on Thursday and Friday respectively.

The consultation was in response to a recent call for wider public awareness on the bill among people in the provinces and rural areas. Representatives from different sectors, including former national and provincial politicians, provincial workers, church, women and community leaders participated at the two-day consultation process.

Mr Keniapisia who is also the Special Secretary to the Prime Minister told participants that the reform is aimed at reducing political instability and its negative effects on our governance system and economic growth. He explained that in order to achieve political stability, the country must have a strong political party system. Once passed the law will provide a scheme to register and establish political parties in the country.

Concerns raised by participants during the consultation process range from formation of political parties along ethnic lines, removal of the Independent group in parliament, behavior of politicians and their parties and the involvement of foreigners in national politics.

Choiseul Premier Jackson Kiloe said his people were happy to be consulted on the bill because it will affect everyone from the top to the bottom of our political system.
"We were pleased that the National Government has decided to consult us on this very important bill. We wish the present parliament pass the bill into law so that we can reduce the problem of political instability in our country," Mr Kiloe said.

A former national politician and present Provincial Minister of Finance, Alpha Kimata said the present house must pass the bill which he believes is necessary for political stability.

"I believe the bill is necessary to shape political parties and the behavior of politicians and I would encourage the present house to pass this bill as soon as possible," Mr Kimata said.

A veteran Choiseul politician, Mr Jason Dorovolomo, who was one of the founding fathers of our nation, said he is enthusiastic to see the bill passed into law to guide the behavior of parties. Mr Dorovolomo said he was happy that the legislation is aimed at strengthening political parties.

"When we designed our existing constitution, we included the Independent Group for good reasons, but, now many of the Independents are the main source of political instability. I am happy that this new law will address that. It must be passed sooner than later," Mr Dorovolomo said.

The consultation team has returned to Honiara on Sunday and will travel to Makira Ulawa province on Wednesday.