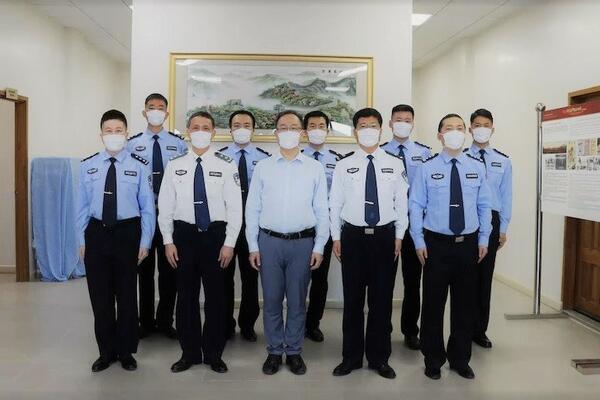 The unit, known as the People's Republic of China Public Security Bureau's Solomon Islands Policing Advisory Group, consists of about nine officers who will train local police to improve their "anti-riot capabilities".

Late last year Beijing announced the Solomon Islands government had agreed to accept its offer of anti-riot equipment and training, in a move that appeared to catch Australian officials off guard and cause some anxiety in Canberra.

In November Australia was among the first countries to provide assistance to the troubled government of Prime Minister Manasseh Sogavare, dispatching 73 Australian Federal Police (AFP) officers and 43 defence force personnel to the Solomons' capital Honiara.

The Australian deployment followed days of unrest which saw buildings, including a police station, set on fire as protesters vented their fury over government services and corruption, as well as moves to align the Solomon Islands more closely with China.

China's embassy in Solomon Islands says it will work with its new advisory group to "continuously strengthen communication with the police, steadily promote the training and assistance to the police under the epidemic situation and further deepen bilateral police cooperation".

In a statement, it added the unit would also "cooperate with the embassy to conduct visits, and safety training for overseas Chinese and Chinese-funded enterprises, so as to effectively protect the legitimate rights and interests of Chinese citizens and overseas Chinese".

The head of the public security bureau team is Zhang Guangbao, who is currently the peacekeeping police captain in Beijing's Ministry of Public Security, and who previously served in Liberia.

Diplomatic figures, who spoke to the ABC on the condition of anonymity, said Australian officials were closely watching the Chinese police deployment, with some officials expressing concern it could even pave the way for military cooperation.

Earlier this month during a visit to Fiji, US Secretary of State Antony Blinken announced plans to open an American embassy in the Solomon Islands.

The US closed its embassy in Honiara in 1993. It is now represented by a consulate there, with an embassy in the Papua New Guinea capital of Port Moresby.

In 2019 Mr Sogavare's government decided to formally cease diplomatic recognition of Taiwan, a move that angered many opposition supporters in Solomon Islands.