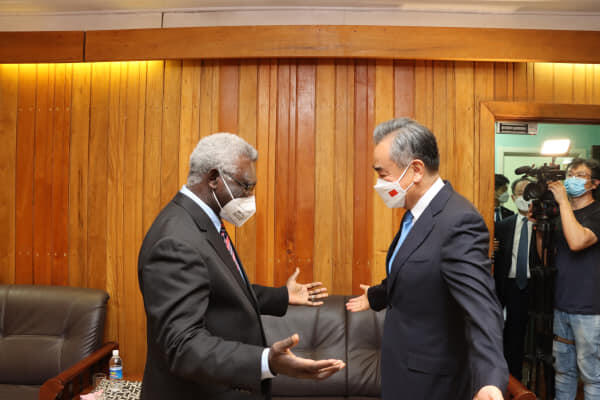 China's Foreign Minister meets with the Prime Minister during his recent visit to the Solomon Islands.
Source: Supplied
Share
Monday, 30 May 2022 11:46 AM

China will consider building a police training centre in Solomon Islands, as Foreign Minister Wang Yi tours the Pacific in a bid to increase its influence in the region.

In addition to the possible new police training facility in the Solomons, China will also help Samoa build a fingerprint lab to go with the construction of an already announced new police academy.

"China… will further a consider a proposal… for a police training centre and support towards police infrastructure and assets given the country's fragile security environment," Manele said during a press conference that was boycotted by local media.

China's foreign minister is currently on an eight-nation tour of the Pacific, during which he is seeking a sweeping regional deal on security and trade, ahead of a group foreign ministers meeting with 10 Pacific nations in Fiji on Monday.

After the meeting, Samoa's government released a statement announcing China would help build a new fingerprint laboratory in addition to the previously announced construction of a police academy.

"China is a key development partner for Samoa providing infrastructural developments in the health, education, and public administration sectors, human resource development, sports development, and technical cooperation in the agriculture sector," the Samoa government said in a statement issued after the meeting.

"Key to the bilateral relations between China and Samoa is the adherence to the one-China principle," the statement said.

The proposal for a Chinese-funded police training centre in Solomon Islands mirrors that of a 2020 promise to build a police school in Samoa, as China seeks to increase its influence in the region through police training support.

At the time, there were questions over the legality of the shipment of the replica guns, as well as the future implications of such firearms training.

Experts and opposition politicians believe the move to bring in replica arms clearly suggested the police force was planning to bring in real weapons from China in the future.

Earlier this week, it was revealed China is hoping to strike a deal with 10 Pacific nations during Wang's tour of the region.

The sweeping agreement covers everything from security to fisheries and is seen by at least one Pacific leader as an attempt by Beijing to wrest control of the region.

A draft communique and five-year action plan sent by Beijing to 10 Pacific nations prompted pushback from the leader of the Federated States of Micronesia, who said it showed China's intent to control the region and "threatens regional stability".

News of the proposed deal follows last month's announcement of a new security pact between Solomon Islands and China, in a move that has concerned traditional regional partners such as the US and Australia, as well as intelligence officials.

That pact has raised fears that China could send troops to the island nation or even establish a military base there, not far from Australia.

Solomon Islands and China say there are no plans for a base.

Wang's Pacific tour coincides with Australian Foreign Minister Penny Wong's own visit to the Pacific, meeting with Fiji's Prime Minister Frank Bainimarama on Friday in her first official trip to the region since being sworn in last week.