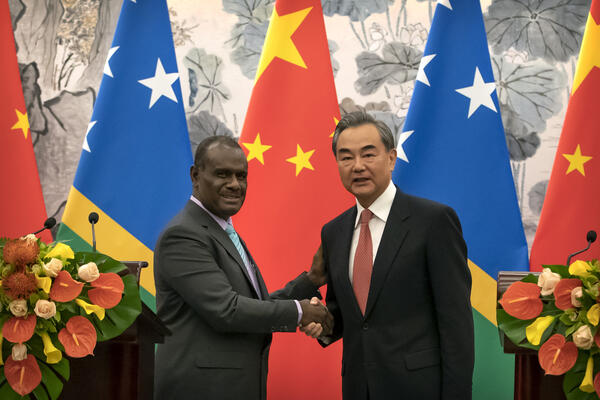 Solomon Islands is a good friend and a good partner of China, Wang said, noting that the establishment of diplomatic relations between the two countries fully meets the long-term and fundamental interests of the Solomon Islands people as well as the trend of development.

Since the establishment of diplomatic ties, China and Solomon Islands have respected each other, treated each other as equals and supported each other in pursuit of common development, Wang said, noting that the two countries' cooperation has firmly safeguarded their common interests and brought benefits to both peoples.

China-Solomon Islands relations, he noted, are becoming a model of friendly coexistence between different social systems and between countries of different sizes.

The Chinese diplomat said not long ago, serious riots broke out in the capital of Solomon Islands, which have hit the safety and lives of local people and overseas Chinese, adding that China extends its deep sympathies and sincere condolences to the government and people of Solomon Islands and strongly condemns all acts of violence.

China, Wang said, stands firmly with the government and people of Solomon Islands, firmly supports the Solomon Islands government's efforts to maintain domestic stability, and firmly safeguards bilateral relations as well as the legitimate rights and interests of Chinese citizens in country.

He said he hopes and believes that the Solomon Islands government will continue to take all necessary measures to protect the safety of local people and Chinese citizens in the country in accordance with law.

The riots had a complex background and some forces with ulterior motives took the opportunity to smear the two countries' relations while trying to subvert the achievements of their diplomatic ties, Wang noted, saying that it is completely against the interests of the Solomon Islands people and doomed to failure.

Solomon Islands has reiterated its firm adherence to the one-China policy and forcefully responded to groundless accusations, and China highly appreciates it, Wang said, adding that the two countries' relations have withstood this test and are stronger than ever before.

China is full of confidence in the future of bilateral relations and will take a series of measures to support and help Solomon Islands in restoring order, carrying out reconstruction, and achieving stable development, he said.

Noting that Solomon Islands is an important member of the South Pacific and developing countries, and shares extensive common interests with China, Wang said China will continue to firmly uphold multilateralism in the international arena and safeguard the reasonable demands of developing countries, especially small and medium-sized countries.

At present, Wang said, both sides should be wary of the attempts by a handful of countries, holding onto a Cold War mentality, to interfere in other countries' internal affairs in the name of human rights, and jointly safeguard the basic norms of international relations as well as international fairness and justice.

Manele warmly congratulated the Communist Party of China (CPC) on its successful convening of the sixth plenary session of the 19th CPC Central Committee, expressed gratitude to China for its strong support and assistance to the economic and social development of Solomon Islands, and extended sincere sympathies to Chinese nationals in Solomon Islands for their property losses during the riots.

Manele said the phone conversation showed that the two countries stand firmly together in difficult times, adding that the situation in Solomon Islands has gradually returned to normal, and efforts are being made to achieve social stability and economic development.

Manele noted that Solomon Islands attaches great importance to its relations with China, and will continue to firmly adhere to the one-China policy, which is the political foundation of bilateral relations.

Solomon Islands is responsible for fully safeguarding the safety, legitimate rights and interests of Chinese nationals and institutions in the country, Manele said, adding that his country is willing to strengthen coordination and cooperation with China, earnestly maintain multilateralism, and safeguard international fairness and justice.