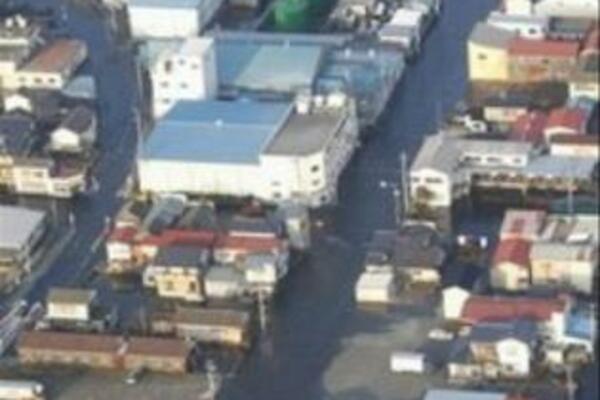 Houses are flooded in seawater in a section of Kesennuma, northern Japan, where waves generated by the earthquake in Chile reached.
Source: Associated Press
Share
Monday, 01 March 2010 10:50 AM

The earthquake that shook the South American nation of Chile on Saturday caused a tsunami prompting a tsunami warning to be issued for 53 nations including countries in the region.

According to the report by the Associated Press, following the magnitude-8.8 earthquake that devastated Chile, a tsunami was generated that reached as far as Japan and Russia, while passing through the region.

According to the report, the Pacific Tsunami Warning Center in Hawaii 'issued a warning for 53 nations and territories, but lifted it Sunday, though some countries were keeping their own watches in place as a precaution'.
The warning was lifted when the waves were smaller than expected.

The tsunami raised fears the Pacific could fall victim to the type of devastating waves that killed 230,000 people in the Indian Ocean in 2004 the morning after Christmas. During that disaster, there was little-to-no warning and much confusion about the impending waves.

According to the report, there were no immediate reports of damage from the four-foot (1.2-meter) wave that struck parts of Japan.

Around the region, there were no reports of serious damage as most nations took precautionary measures to evacuate people to higher ground.

In Tonga, according to the Matangi Tonga Online, there was a measurement of small Tsunami Wave Activity at Nuku'alofa of 0.10m or 0.3ft but there have been no reports of damage.
Hundreds of people were evacuated to higher ground when the warning was issued.
Parts of Tonga were devastated late last year when the Samoa tsunami also struck parts of the island nation, claiming 9 lives.

In Samoa, according to the Samoa Observer, people woke up to the sounds of tsunami warning sirens and made their way to higher ground.
The nation lost more than a hundred lives to the tsunami that stuck it, neighboring American Samoa and Tonga late last year.

In Fiji, people also moved to higher ground when the warning was issued. According to the Fiji Times Online, the warning was cancelled after two hours had lapsed from the estimated arrival time and after no significant rise in sea level has been observed from tide gauges in Fiji and Tonga.

According to Australia Network News, the Marquesas Islands in the north east of French Polynesia were hit by a four metre wave, but according to Thibault Marais from Tahiti Presse Online, while some fishing boats were sunk and the local dock was damaged, no was hurt.

Meanwhile, according to the latest report by the Associated Press, the death toll of the Chilean earthquake has so far reached 708.
Rescuers are still braving the aftershocks digging for survivors.