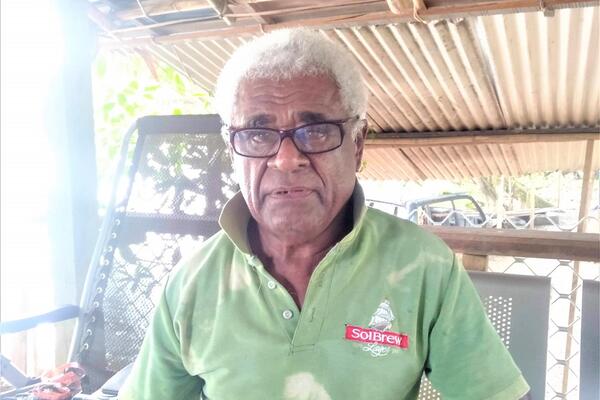 Chief Saketala sounded the alarm following what he describes as a rise in the number of fake land owners.
Source: STO
By Jimmy Nolan
Share
Monday, 07 June 2021 12:19 PM

John Saketala, a Paramount Chief of Ghaobata House of Chiefs in East Guadalcanal, has warned People not to purchase land outside of the East Honiara town boundary.

Chief Saketala sounded the alarm following what he describes as a rise in the number of fake land owners going around convincing people with false documents, showing that they are the purported land owners.

He says that all alienated land outside of the east Honiara town boundary belong to various tribal land-owning groups, and the Ghaobata House of Chiefs are still working with all stakeholders to resolve the issue.

He says the Ghaobata House of Chiefs understands some of the people occupying land areas outside of the east Honiara town boundary have done so without consulting the right tribal owners.

“We are aware that there are people, who I would describe as fake land owners, who claim that they own land just for their own interest, going around convincing people about land, and receiving money from people in exchange for land.

“I warn those individuals that do dealings with them to be careful because you will waste your money”.

He says the continuous illegal settlement of areas outside of the town boundary will only serve to complicate an already sensitive situation.

Chief Saketala adds the Ghaobata House of Chiefs are made up of more than five land owning tribes, and urges individuals or developers to follow both the traditional and legal processes when they seek to secure properties such as land.

He says the Ghaobata House of Chiefs are looking forward to working closely with the Guadalcanal provincial government land department in identifying the issues of land outside the Honiara town boundary.