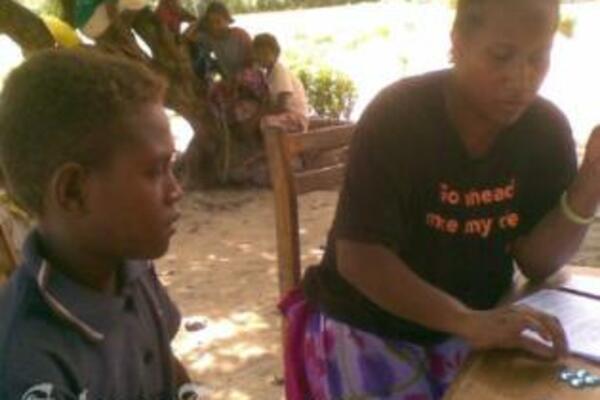 Four schools were visited in Central Islands Province by a joint review team from the Ministry of Education, World Vision and AusAID.
Source: Australian High Commission
Share
Thursday, 20 December 2012 09:11 AM

Four schools were visited in Central Islands Province by a joint review team from the Ministry of Education, World Vision and AusAID. The results were compared to outcomes from the Makira Early Childhood Development Program, which ran from 2005 to 2011 through a partnership with World Vision, Makira Provincial Government and Ministry of Education.

Senior Manager for AusAID's Education program, Shalom Akao said that from the initial analysis of the data collected, Makira Early Childhood Development Program was successful in boosting literacy and numeracy levels when compared to the schools visited in Central Province that did not have ECE centres. World Vision has started designing a program for Central Province, of which ECE will be a component.

"The Makira program provided early childhood education to 2000 children in target communities and has been very successful, so the AusAID-funded review is looking at the outcomes and the long-term impact of the program as it starts designing a regional ECE program," Ms Akao said.

"Early results from the tests reported by World Vision in Makira indicated higher levels of literacy and numeracy amongst those who had attended ECE centres prior to entering primary school."

Ms Akao said sixty three students (46% male and 54% female) in Grade 1 and Grade 2 in the four schools were tested on reading and numeracy skills.

"Initial findings from the Central Islands Province schools with no early childhood education showed that 98% of the students tested in Grade 1 and Grade 2 were not able to read or write English properly," Ms Akao said.

"The review team found the tools used to test reading and numeracy skills were relevant because they were developed based on the current syllabus used by all primary schools around the country."

One of the parents commented that the ECE is still a new concept for communities and that the Education authority needs to inform communities how to set up community ECE centres. They said communities have resources to establish an ECE but needs to be directed by authorities.

One teacher told the review team "that students that attended ECE found it easy to cope with the level of teaching in class 1 and 2. Those who do not attend ECE still have problems in writing and are not able to recognise numbers and simple letters".

Ms Akao said the final report would assist with the design of a regional Early Childhood Education Program, as well as identify ways that AusAID can continue to support the Ministry of Education deliver education for all children in Solomon Islands.

"While ECE shows a positive impact on student learning, the future challenge is how best to support this growing area when the whole of the education sector is under resourced."