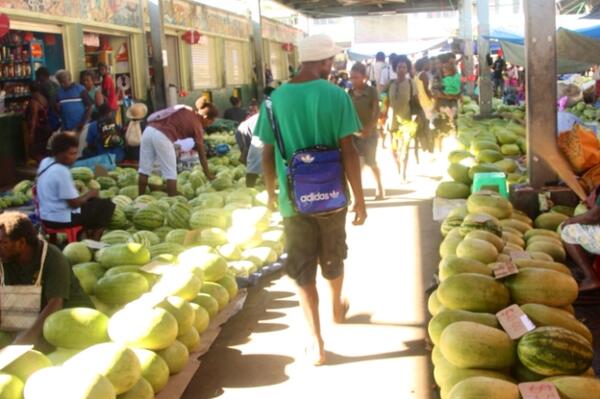 Market vendors, who are predominantly women, rarely get an opportunity to participate in decisions affecting their workplace, but by working together as a unified group, they hope to expand opportunities for members.
Source: bigfatglobaladventure.com
Share
Wednesday, 13 August 2014 07:40 AM

More than 200 Honiara market vendors have formed an association to promote the rights and interests of stallholders and to help improve conditions at the Solomon Islands biggest market.

The Honiara Central Market Vendor Association (HCMVA) was formally registered with Company Haus under the Charitable Trust Act in July and has already recruited 220 members among stall holders.

“I can see many things inside the market that need changing – it is not clean, there is no water. So I see this [the association] as a good thing. It is an opportunity to work together to make the market clean and good for everyone,” says Rose Starlyn, a clothing vendor at Honiara Central Market and the newly elected chairperson of the association.

Market vendors, who are predominantly women, rarely get an opportunity to participate in decisions affecting their workplace, but by working together as a unified group, they hope to expand opportunities for members. Key concerns the association will work on with market management and Honiara City Council will be safety and cleanliness within the market, fair and transparent market operations, and measures to eliminate gender-based violence.

HCMVA vice-treasurer and handicraft market vendor, John Perry, says he joined the association because marketplace issues were not being addressed.

He believes that working together will be more effective in ensuring the experiences of market vendors are heard and that their concerns and interests, such as difficult work conditions and obstacles for handicraft vendors gaining access to overseas markets, are better understood and taken into consideration by relevant authorities.

The HCMVA was formed following a series of workshops and open meetings as part of UN Women’s six-year regional Markets for Change (M4C) project, which principally funded by the Australian Department of Foreign Affairs and Trade.

The M4C project aims to ensure Pacific marketplaces are safe, inclusive, non-discriminatory, and promote gender equality and women’s empowerment. A key element of the M4C project is the formation and strengthening of representative marketplace groups, such as the HCMVA.

According to UN Women, because rural and urban women make up the majority of vendors at Pacific markets it is essential that women are supported to participate in and take on leadership positions in marketplace groups.

“This is all new for me,” says Rose. “There will be challenges, but already I’ve learned a lot of new skills and experienced new things. Now people come to me and ask me what the association is for. I’ve learned how to explain the aim of the association and how we can all benefit.”

Jilly Maehaka, the association’s vice-chairperson agrees there will be challenges, such as dealing with time commitments and helping association members to deal with workplace issues, however, she believes positive changes - such as learning how to make strategic and realistic action plans - will come from working together as an association.

John believes he has already noticed positive changes, with some vendors understanding their rights as workers and identifying positive steps in order to make changes.

UN Women will continue to work in a support and advisory role with the HCMVA and its executive committee, as well as with Honiara City Council, to establish effective and sustainable dialogue mechanisms.

Market vendors from Auki Market are currently working to formally establish their own market vendor association and expect to have the association registered within the next month.