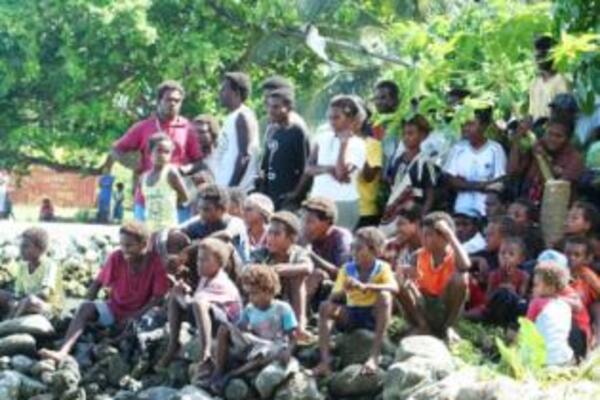 The province currently has two constituencies including Gela and Savo/Russells with an estimated population of 27,000 people.
Source: Photo Supplied
Share
Tuesday, 26 May 2009 08:53 AM

Leaders and people of Central Islands Province have called on responsible National Government authorities to create two additional constituencies to help address inadequacies in the distribution of government funded projects in the province.

The province currently has two constituencies including Gela and Savo/Russells with an estimated population of 27,000 people.

Premier Patrick Vasuni together with chiefs and Community leaders made the call last week when the Governor General Sir Nathaniel Waena visited the province.
The Central Islands Provincial Government is proposing a submission to the Constituency Boundaries Commission for consideration before the 2010 national election.

"My people feel strongly that we deserve additional constituencies due to our rising population and sparse land area. We feel inequitably represented in Parliament," Premier Vasuni told Sir Nathaniel in Tulagi last Saturday.

"Our people have head of millions of dollars injected into the government but we haven't felt major improvements to our lives," said Moffat Luza of Polomuhu village in North Gela.

"The distribution of government funds through our elected representatives has been inequitable and not many people feel the benefits," said Raxton Diwa, MPA for Banika Ward in the Russell Islands.

Transportation and Communication around the entire province depends on motorized boats with virtually no roads, except old deteriorated roads built during the colonial days in Tulagi and Yandina.

MPA for Sandfly and Buenavesta Ward, Patterson Mae said his people experienced frequent sea nightmares, sometimes costing lives when traveling to and from Honiara to sell their fish and garden produces.

"Traveling by motorized boats is a risk to the lives of our fishermen and farmers. Many lives have already been lost," Mr Mae said.

"The rising population of the province with an annual growth rate of 2 percent is clearly exerting more pressure on basic social services in the province."