Cattle Not Fit for Human Consumption 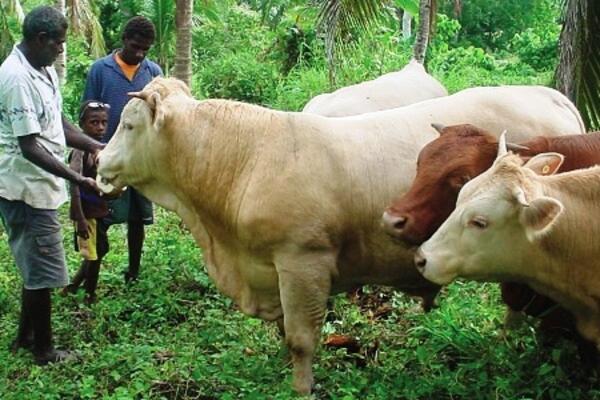 The government of Vanuatu has stated that it will cease the export of live cattle to the Solomon Islands if these animals are killed.
Source: Photo supplied
Share
Friday, 29 November 2013 10:08 AM

The Ministry of Agriculture and Livestock has warned that the cattle brought in from Vanuatu are currently not fit for human consumption.

This follows threats by workers of the West Kwaio Cattle project to slaughter the Cattles destined for designated farmlands in West Kwaio.

The Ministry has warned frustrated workers of the West Kwaio Cattle project not to kill and eat or sell meat from the cattle delivered this week as they carry high concentration of veterinary drugs.

Doctor Israel Wore, Senior Veterinary Officer at the Livestock Department, stated that his counterparts in Vanuatu have warned that the cattle “were given a dose of high level veterinary drugs before they left for the Solomon Islands.”

“The high concentration of drugs on the cattle is enough to make people really sick or even die...so people must not take this lightly,” said Dr Wore.

“Also, the government of Vanuatu has stated that it will cease the export of live cattle to the Solomon Islands if these animals are killed.”

Mr Wore explains that the government of Vanuatu has been sympathetic with Solomon Islands to allow two consignments of cattle to Solomon Islands, one in 2011 and one this week.

He adds that any news of people killing these imported cattle would be a huge blow to combined efforts by the governments of Vanuatu and Solomon Islands to revive the industry.

The Under Secretary, Mr David Patternot, says the Ministry yesterday afternoon deposited a cheque for the work that was already done on the cattle project over the past year.

Mr Patternot says once the payment is cleared, the Gonokukufo Association, who represent the West Kwaio workers, should access the funds as it is paid directly to the Association.

It is understood the disgruntled West Kwaio cattle project workers have issued a notice to the Government to pay up or they will slaughter some of the cattle and sell meat for their salary.