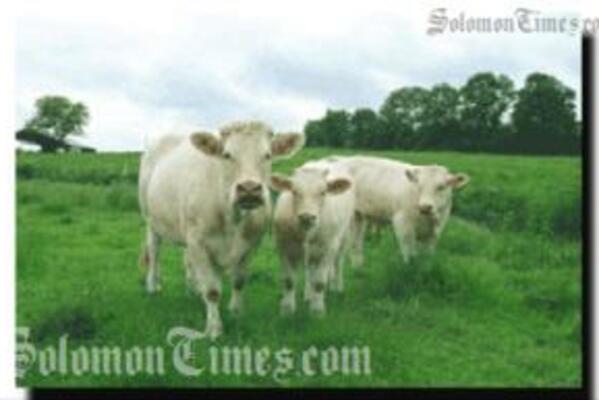 Under the new arrangements, cattles will be brought in from Vanuatu.
Source: http://www.vanuatu678.com
Share
Wednesday, 22 June 2011 09:22 AM

First importation of cattle will eventuate in September, according to the Minister of Agriculture and Livestock Development (MALD), Connelly Sandakabatu.

Mr. Sandakabatu informed the local press that 400 heifers will be imported September from Santo, Vanuatu.

He said the government has received assurance from the veterinary in Vanuatu that their cattle are disease free.

The new breeding place is Tanavalu farm in Santo.

Mr. Sandakabatu who just returned from Vanuatu said the trip was a success, having completed the task with the signing of a Memorandum of Understanding (MOU) to seal the deal.

The delegation also held discussions on important economic development, particularly on agriculture sector and fisheries in which the two countries can share.

Mr. Sandakabatu said Vanuatu have an overwhelming interest on rice growing, fisheries, and vegetables in the country.

"We are satisfied with the trip and it is a win-win situation in which the people of Vanuatu and the government can access the areas of economic development in the country," he said.