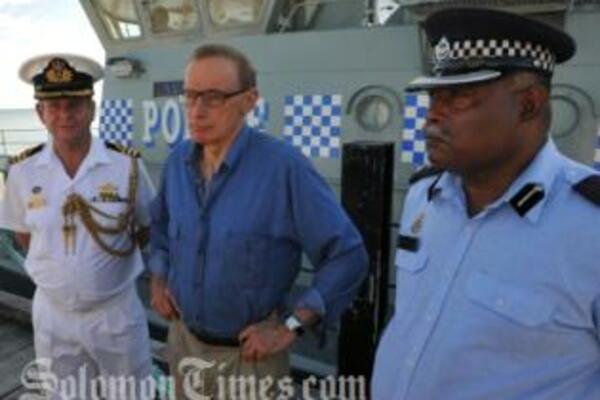 "Fish are important as they provide an important food source and protein in the diet of poor Pacific Island communities and we don't want to see illegal or unregulated fishing to deplete that resource," Senator Carr said.

Lata and Auki are used for maritime surveillance and fisheries protection. They are also used for search and rescue operations, towing of disabled vessels, sea safety checks on vessels and inter-island transport, particularly for disaster relief operations.

"They provide Solomon Islands with the capability to patrol their waters and provide a significant boost to the local economy through both fishing fines and an improved negotiation position when discussing foreign fishing rights and fees," Commander Turner said.

Australia donated the two Pacific Patrol Boats to Solomon Islands in the early 1990's as part of a Pacific wide project. It continues to provide funding support for fuel and maintenance of the boats, as well as related shore infrastructure through the Australian Defence Cooperation Program (DCP).

Maritime training is provided by the Australian Maritime College (AMC) in Launceston, Tasmania which trains students in the deck and engineering streams. There will be 15 students from the RSIPF Maritime Unit attending AMC this year.

The Pacific Patrol Boat is a class of 22 patrol boats built by Australia and donated to 12 South Pacific countries. Constructed from 1985 to 1997 and operated by militaries, coast guards or police forces of the 12 island nations, the boats are supported by the Pacific Patrol Boat Program. They are used for maritime surveillance and fisheries protection.

Under a Life Extension Program which comprised a six-month refit funded by the DCP which was completed in 2011, has extended the predicted service life of the class to 2027. The Australian Government, through the Pacific Maritime Security Program, is investigating ways to begin replacing the current patrol boats from 2017.