Campaigns to Lobby for Legislative Change in Vanuatu 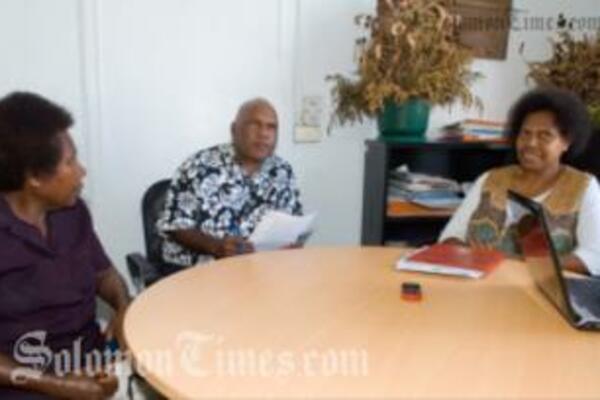 A coalition of chiefs, women's advocates, union representatives and government officers have come together in Port Vila to plan strategies, share information and launch three separate and ambitious legislative lobbying campaigns in Vanuatu.

This platform for action was hammered out at the Leadership and Legislative Change workshop held at the Police Training College, Port Vila over the past week. The workshop was organised by the Department of Women's Affairs, in partnership with the Secretariat of the Pacific Community Regional Rights Resource Team (SPC RRRT).

'Laws affect everyone, but not everyone understands how laws are made, or changed, and how they can influence this process,' says Seema Naidu from SPC RRRT. 'The workshop provides opportunities for communities to realise their ability to exercise leadership around legislative change.'

Chief John Chedak from Tongoa Island and Elizabeth Fey, a community paralegal from Ohlen, have mounted a campaign for the inclusion of temporary special measures in the Peoples' Representation Act to increase the number of women entering parliament. 'Women contribute in a lot of areas of life. To enhance development in Vanuatu, we need both men and women to participate. So, for a fair and just leadership, it is now the right time for us to be serious about promoting gender equality and addressing this in the law,' says Chief Chedak.

A second campaign, supported by representatives from the Police, the Department of Women's Affairs and Live and Learn, a non-governmental organisation, has targeted Vanuatu's outdated sexual offence laws. Their aim is to have the penal code reformed so that the law becomes stronger and is better able to protect women, children and persons with disabilities from sexual violence. Police Officer Anne Marie Simon cited the increasing incidence of sexual violence involving women, children and the elderly as a reason why penal code reform needs to happen sooner rather than later.

Also attending the workshop was Loreen Bani, a representative of the Vanuatu Workers' Union. Bani has launched a campaign to address gender-based discrimination in the Employment Relations Bill, which is currently going through a process of consultation. It is important to stand up for workers rights in line with international standards, despite opposition from employer groups, says Bani. One of the campaign's key focal areas is the provision of maternity leave. 'Leadership is critical and maternity leave is not a bonus; it is an entitlement, since women are unique and they are producing the next generation of Vanuatu's Labour force.'

Each campaign brings together representatives from government and non-governmental organisations and receives support from the Department of Women's Affairs and the Ministry of Justice. Mentoring support is provided by the Secretariat of the Pacific Community Regional Rights Resource Team in partnership with the Fiji Women's Rights Movement and with support provided by the Pacific Leadership Program.

The campaigns will seek to advocate on behalf of women, increase community support, and create sufficient momentum to achieve legislative change in Vanuatu. It is not a job for the faint-hearted, says Seema Naidu, 'It is hard to change laws that address discrimination and promote gender equality. The Family Protection Act in Vanuatu took 12 years to be enacted.' Leadership is essential she says, and energy, drive, commitment and tenacity are pre-requisites.