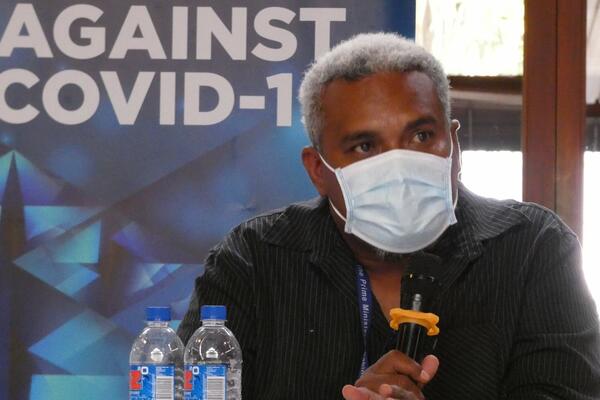 Special Secretary to the Prime Minister, Mr. Albert Kabui, says Cabinet has the mandate to change policies as it sees fit.
Source: STO
By Georgina Kekea
Share
Wednesday, 16 March 2022 09:14 AM

Cabinet has defended its plan to extend the current term of parliament to five years.

Speaking on their behalf in a Press Conference, Special Secretary to the Prime Minister, Mr. Albert Kabui says Cabinet has the mandate to change policies as it sees fit.

Kabui made this statement in light of the recent call by the Opposition Group in Parliament, calling on the Cabinet not to extend the current term of parliament to five years.

The Opposition Group in Parliament says the extension of parliament is not in the best interest of Solomon Islanders and that Cabinet is only doing this for their own benefit.

The Opposition Group says Cabinet should also consult with the people.

But speaking to journalists recently, Mr. Kabui says it is not a legal requirement to consult with the people to change its policy.

“Can the government come up with a policy without consultation? Yes. Why? It has the legal mandate to do so”, Kabui said.

Kabui says Solomon Islanders have their Members of Parliament to speak on their behalf on such matters.

The Opposition Group in Parliament joined the Solomon Islands Chamber of Commerce and Industry (SICCI) to call on the government not to extend the current term from four to five years.

The Opposition Group in Parliament says the reasons given by the government for the extension are very weak.

Opposition Leader, Mr. Mathew Wale says the idea to extend the life of parliament is ‘self serving’.

“This we view as a very serious breach of trust with the people. We want to highlight this. Unfortunately the Government seemed intent to extend this life of parliament to five years. For this term only or for every term, we are not clear on that. The fact that they do not consult with the people is of great concern to us”, Wale says.

Special Secretary to the Prime Minister, Mr. Albert Kabui says Cabinet wants to extend the current term of parliament because of the 2023 Pacific Games.

The Electoral Act 2018 does provide room to defer any Election, but it states that this section applies if the Commission is satisfied that because of any unforeseen natural or manmade reason, it is not able to or will not be reasonably possible to conduct an election.

The Solomon Islands Constitution too is cautioning the Cabinet and the government saying ‘Parliament may make laws for the peace, order and good of Solomon Islands’.

The Cabinet is adamant about the extension and has consulted with some sectors already.