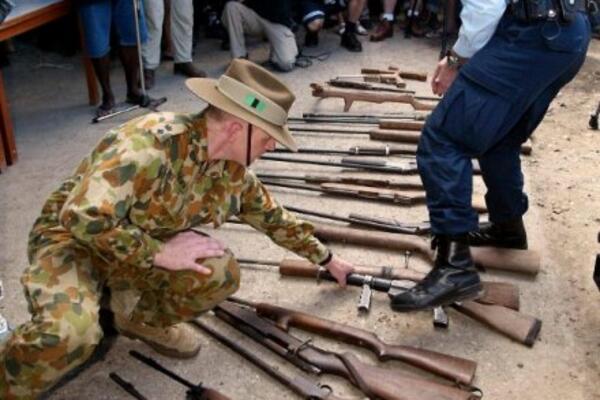 In 2000, under the terms of the Townsville Peace Agreement, the Regional Assistance Mission to the Solomon Islands (RAMSI) launched its first gun amnesty. This aimed to collect and destroy between 2,640 and 3,520 illegally held, mass-manufactured small arms.
Source: Photo supplied
Share
Friday, 18 October 2013 08:54 AM

Cabinet has approved a limited reintroduction of firearms into the Royal Solomon Islands Police Force.

Minister for Police, National Security and Corrections Chris Laore announced the Cabinet decision at the signing of the 5 year RAMSI Drawdown Strategy at the Rove Police Headquarters this morning.

Minister Laore said the limited reintroduction of firearms is a capacity development program within the 2013-2017 RAMSI Drawdown Strategy for the Royal Solomon Islands Police Force.

Minister Laore also said there are two phases to the limited reintroduction of firearms project. He said the two-phased approach will allow Cabinet to monitor the progress of implementation, and inform and consult with stakeholders to authorise the final issue and carriage of firearms by the Royal Solomon Islands Police Force.

A similar policy was attempted by former Prime Minister Manasseh Sogavare, who eventually conceded and backed off due to public pressure not to re-arm the police.

During five years of ethnic conflict in the Solomon Islands from 1998 to 2003, thousands of firearms, the most dangerous of which were stolen from local police armouries, were the instruments most responsible for destabilising the nation and terrifying its population.

In 2000, under the terms of the Townsville Peace Agreement, the Regional Assistance Mission to the Solomon Islands (RAMSI) launched its first gun amnesty. This aimed to collect and destroy between 2,640 and 3,520 illegally held, mass-manufactured small arms.

By August 2003 records show that 3,730 weapons, including 659 military-style small arms and 300,000 rounds of ammunition, most of which had been stolen from police armouries, had been handed in for destruction. This represented 90-95 per cent of factory-made small arms in civilian hands.

The total number of lethal weapons of all types surrendered was between 5,800 and 6,000. These were publicly destroyed by burning, dismantling and dumping at sea.

In November 2004, following three gun amnesties, one evaluation reported that "roughly 220 high-powered weapons remained in the community." Three years later in 2007, the number of firearms of all types still in private possession was estimated to be 1,775.