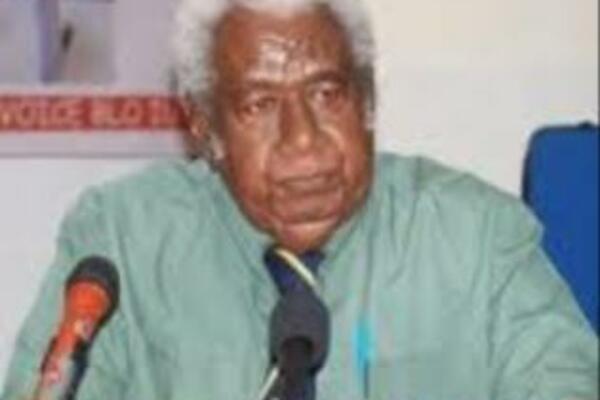 Sir Peter Kenilorea will be on of those contesting the seat for East Are'Are Constituency.
Source: Photo Supplied
Share
Wednesday, 11 July 2012 11:13 AM

The Solomon Islands Electoral Commission is happy to announce and confirm to the good constituents from North Malaita and East Are'Are constituencies the final list of validly nominated candidates who will be contesting for the two parliamentary seats on the 1st August.

Chief Electoral Officer confirmed the final listing of validly nominated candidates to contest this by-election polling day on 1st August which is only a three weeks (3) away.

"Four (4) nomination applications received to contest the East Are'Are seat. There are no invalid or withdrawal nominations received and therefore the final number of candidates that will be contesting remain as four" Mr Haununu said.

Below is the final list of candidates listed according to the ballot paper draw who will be contesting the two national by-election seats.


Mr Haununu said that details of the final candidates listing, voters' list , polling station and village allotments will be published in the returning officers' final notice 33 and therefore voters are urged to check out for this final notice one week before polling day.

"No update register is conducted for the this by-election and therefore only voters who have voted during 2010 National General Election will cast their ballots on the polling day since the 2010 voter list will be the one used".

Mr Haununu wants to remind voters from these two constituencies that it is important to check out for this final notice to check for your names before Election day to avoid disappointments and running around on the polling day.

Names of accredited presiding and polling officers will be announce as soon as selection list is finalized and training to take place few days before the polling day.

Also in preparation for the polling day, awareness teams from the Electoral Commission have visited communities from these two constituencies with screening of how to vote DVD , with messages on rights of voters, dos and don'ts of conduct of elections, clarification of election offenses and penalties and the whole election timelines which was very much appreciated by the people.

The awareness team had just returned later last week from a two weeks constituency tour with the DVD screening.

The chief Electoral Officer would like to thank communities for their cooperation and attendance during the programs held and looking forward to such response in future.

Electoral Commission hopes that voters should now be well informed on the dos and don'ts of election through this awareness campaign program and EC is looking for a free and fair election.

We have not yet arrived and some miles away from the polling day and Electoral Commission has urged good voters from North Malaita and East Are'Are Constituencies to patiently stay with us through media for more updates.