Bust of a Woman: Solomon Islands 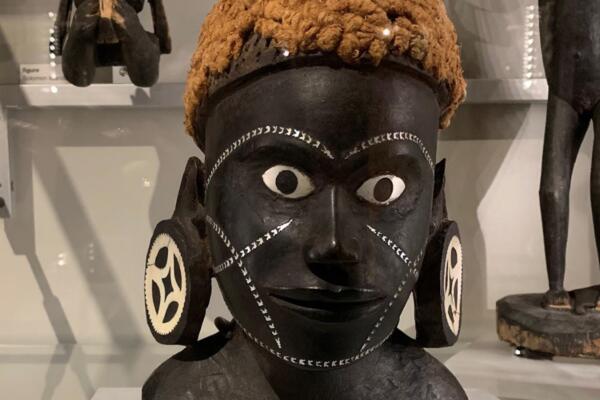 The black pigment is in sharp contrast to the vibrant colour of her hair and the silver markings on her face.
Source: Samira Sallow
By Steve Fale
Share
Monday, 08 April 2019 12:15 PM

A sculpture from the Solomon Islands has been highlighted by Samira Sallow in an article in the Ubyssey, a popular student newspaper in British Columbia, Canada.

The writer, Samila Sallow, calls the artefact a “bust of a woman,” referring to the intricate details that has gone into the wood carving.

The sculpture from the Solomon Islands is a woman’s bust created with real hair and decorated with shells and ebony. The wood carving is on display at the Museum of Anthropology (MOA) at the University of British Columbia.

The black pigment is in sharp contrast to the vibrant colour of her hair and the silver markings on her face.

“She is accessorized with large earrings and painted with complex designs. It’s not completely clear why this bust was sculpted, but it could be a way of celebrating various focal points in people’s lives such as the passage to adulthood, marriage or death,” Samira Sallow writes.

Although much is said about the sculpture, not much is known about the artist or its orgins within the Solomon Islands.

The Museum of Anthropology was established in 1949 as a department within the Faculty of Arts at the University of British Columbia. In 1976, it moved to its current home, an award-winning concrete and glass structure designed by Canadian architect Arthur Erickson with the grounds landscaped by Cornelia Oberlander.

Since its inception, MOA has been at the forefront of bringing Indigenous art into the mainstream by collecting and curating traditional and contemporary Indigenous art in a way that respects the artists and the cultures from which this work comes.

MOA houses nearly 50,000 works from almost every part of the world, while the Laboratory of Archaeology houses an additional 535,000 archaeological objects in the building.

Nearly half the collection is composed of works from Asia and Oceania while other significant holdings represent the Arctic, Latin America and Europe.