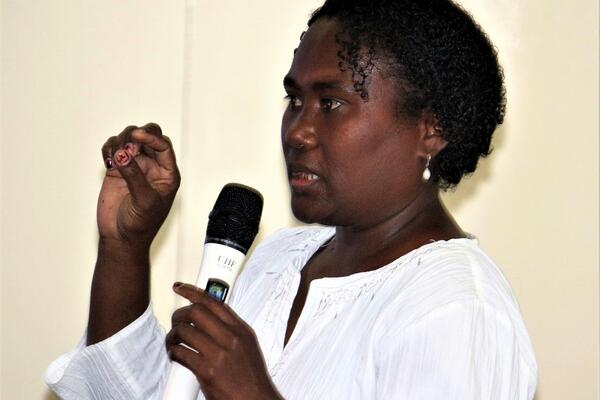 The Solomon Islands Chamber of Commerce and Industry (SICCI), as the peak body representing private sector in the country, welcomes opportunity for companies and industry to be involved in consultations currently underway in reviewing the country’s Trade Dispute Panel (TDP) Act.

Chief Executive Officer (CEO), Ms Atenasi Ata, highlighted this during an Information Session on the Trade Dispute Panel the Chamber hosted for its members on Monday 29 June 2020 at the Heritage Park Hotel.

“As a Chamber we see the value of involving companies and businesses in these consultations given the fact that the Trade Dispute Panel conciliates or arbitrates on disputes between employers and former employees being the first step before having to go through the formal court process which can be very time consuming and costly,” she said.

The Chair of the TDP, Ms Natalie Kesaka, who made a presentation during the Information Session agrees with the proposal of involving the private sector in these consultations.

Ms Kesaka has been Chair since 2015 and before that, worked with the Office of the Director of Public Prosecution (DPP) for eight (8) years.

She confirmed that her office is currently undertaking provincial consultations as part of the process of amending the current trade disputes law.

Ms Kesaka in her presentation highlighted the role of TDP, core functions and an explanation of the process involved in resolving disputes and unfair dismissal cases.
She said the vision of TDP is to be an active partner in the settlement of industrial disputes between employers and employees.

“To achieve this, we are working to enhance and effectively engage in the settlement of industrial disputes between employers and employees, effectively dispose disputes with the available resources at hand and efficiently implement the policies of the government of the day entrusted on the office through the ministry,” she said.

TDP’s role is to perform the role of a form of Alternate Dispute Resolution (ADR). It makes binding awards where negotiation fails, facilitate or encourage, amicable settlement of trade disputes (conciliation), it also performs arbitration (a process similar to the courts) and can only be resorted to where settlement cannot be reached through the process of conciliation.

“At one sitting only one from each side will sit with the Chair or her/his Deputy. Panel members are appointed by the Minister of Commerce, Industry, Labour and Immigration and their term of appointment is two years and can be renewed if recommended by the nominating body.

“Chair or the Chair's Deputy are both Lawyers and are appointed by the Judicial and Legal Service Commission,” she said.

A total of forty-seven (47) participants attended as representatives of SICCI member companies. They also had the opportunity to ask questions and made comments in regards to the work of TDP.

SICCI CEO, Ms Ata said this session complements the Chamber’s advocacy work such as through the Labour Advisory Board when it was reviewing the minimum wage last year, and the more recent COVID-19 situation the country is in.

She thanked the Chair of the Trade Disputes Panel, Ms Kesaka for the opportunity for the firms and big-employing industry reps to be more informed than they were before about the Trade Dispute Panel.