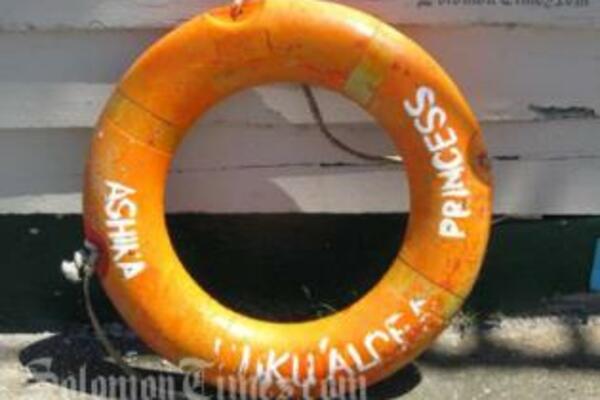 A life buoy from the Princess Ashika, the ferry that sank in Tongan waters last month claiming 74 lives, was found floating in Fijian waters last week.

According to Fiji Times Online, the buoy was found floating in Levuka waters, about 1000 kilometres from where the ferry sank in Tongan waters.

The discovery six weeks after the tragic incident shocked the nine-member dive crew of Ovalau Watersports who were returning from a diving trip in the Wakaya passage at around 1.30pm on Tuesday.

Ovalau Watersport's Andrea Georger said they saw the life buoy floating in a distance and to their disbelief, they saw that the words -- Princess Ashika, Nuku'alofa - written on it.

According to the report, Ms. Georger said, "It's really strange to find this buoy back in Levuka because it really floated a long way. Some people have got to have been clinging on to it for a while. It's really strange."

"It is a kind of destiny thing that we find this life buoy back in Levuka waters because this ship was well known for its service here for a long time before it was sold," she said.

Ms Georger said when they discovered that it belonged to the Ashika, there was silence for a while in the dive boat "because everyone in the boat knew what had happened in Tonga".

"Everyone was thinking about the incident in Tonga in August. But we did scan the area and found nothing else," she said.

Ms Georger said she would love to see the life buoy handed to the Tongan community in Fiji or to the Levuka museum.

Meanwhile, according to Fiji Times Online, reports 'have surfaced that the Princess Ashika was being repaired at night in Tonga to avoid public scrutiny of the ferry's seaworthiness before its fatal voyage'.

Mr Sevele had said the ship was seaworthy.

The island nation held a mass burial last month for the lives lost in the country's biggest shipping tragedy.