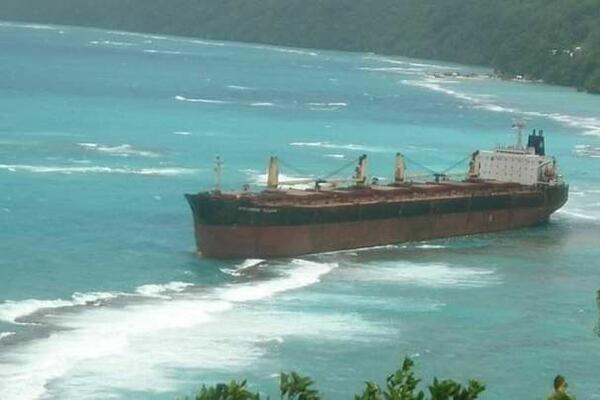 Earlier this month, the vessel went onto a reef off Rennell Island, the southernmost island in the Solomons. Rennell is located about 100 nm due south of Guadalcanal.
Source: Facebook
Share
Monday, 18 February 2019 06:35 AM

The bulker Solomon Trader has gone aground in a sensitive marine area in the Solomon Islands, raising concerns of environmental damage.

On February 5, the vessel went onto a reef off Rennell Island, the southernmost island in the Solomons. Rennell is located about 100 nm due south of Guadalcanal.

Stormy conditions may have contributed to the grounding, and another storm is hampering the response effort. A small tropical cyclone - Cyclone Oma - is passing to the south of Rennell Island on its way towards Vanuatu, with bands of thunderstorms extending out for hundreds of miles.

The Solomon Trader is reportedly loaded with bauxite ore, one of the Solomon Islands' key export commodities. Rennell Island has hosted a bauxite mining operation since 2014, and has a geographic advantage in the trade due to its relative proximity to the Chinese market. The Bintang Mining development, located on the west side of the island, is locally controversial; the east side of the island is a UNESCO World Heritage Site.

No pollution or injuries have been reported, and efforts are under way to salvage the Trader, her shipping agent informed Radio NZ. However, the government of the Solomon Islands is concerned about the possibility that the wreck's condition could deteriorate in foul weather.

"We treat this is as a disaster, it's imminent, we think that there is possibility for an oil spill," said the acting director of the Solomon Islands Maritime Administration, Jonah Mitau, speaking to ABC. "We do not have the equipment to contain such a situation."

According to local environmental group Oceans Watch Solomon Islands, the bay's reef could be damaged by the casualty.

In addition, the salvage may be complicated by the presence of large coral heads, Oceans Watch member Chris Bone told RadioNZ, and any release of bunkers would compound the alleged harm from bauxite released by nearby mining operations.