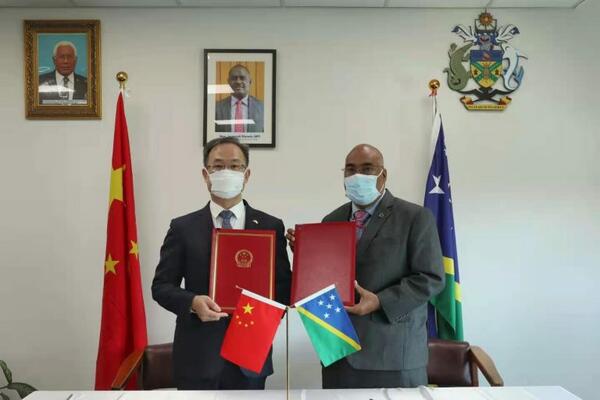 Chinese Ambassador H.E. LI Ming and Permanent Secretary of the Ministry of Foreign Affairs and External Trade Mr. Colin Beck have initialed the Framework Agreement Between the Government of the PRC and the Government of Solomon Islands on security cooperation.
Source: SIBC
Share
Tuesday, 05 April 2022 13:17 PM

The Solomon Islands government’s intention to broaden its security cooperation with willing partners is necessary to sustain its internal peace and stability.

A statement from the government says the country has been ruined by recurring internal violence for years and because of the limited capability of the local police force to deal with violent uprisings.

"The government under the leadership of Prime Minister Manasseh Sogavare believed that broadening security treaties is a considerate approach to ensure the country’s development aspirations are addressed and effectively supported.

Prime Minister Manasseh Sogavare last week said the decision to expand the country’s security treaty with China stems from the conviction that creating more security partners enables the country to provide avenues to maintaining peace and security when needed.

“We are a country that has limited security capability, and it is clear that we will constantly need support, and whilst we continue to try and address those shortfalls, our security treaties will serve as our support to ensure that we are able to maintain peace and protect our citizens,” Sogavare said.

Responding to critics that said the deal with China will lead to Solomon Islands becoming an autocratic state, Sogavare pointed outed that such treaties are all part of our security intent to safeguard this country and our national interest.

He said he has no intention of leading an Autocratic Government with our security arrangement just because the government deals with China as advocated by some people.

The government continues to promote its foreign policy of “friends to all and enemy to none,” principle, and in this spirit the government welcomes any country that is willing to support us in our security space.

The statement says diversifying the country’s security space will help broaden the country's security arrangements, and provides an avenue for the country to seek support from not just a single country, which could be a burden.

"This means the scope of the country’s needs can be best addressed if the government work with various partners to address certain security issues under an agreed framework.

"Because of that, it is important to ensure that the government established a framework to guide its partnership in delivering the country’s security arrangements since the country’s needs are many and no one country will be able to take full responsibility," the statement reads.

Last week, the government announced that the Security Treaty between Solomon Islands and the Peoples Republic of China was initialed and will be signed soon.