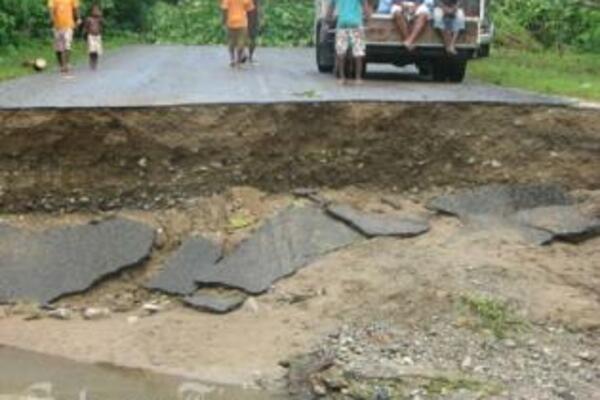 The Police Response Team, with the support of Participating Police Force assets, are doing all they can to assist the communities that are affected by the floods.
Source: Photo Supplied
Share
Friday, 22 January 2010 09:54 AM

Flooding has destroyed the bridges of Poha and Tamboko rivers in Northwest Guadalcanal.

Acting deputy Police Commissioner Edmund Sikua says they have dispatched a police vehicle to check on the safety of people in both west and northeast Guadalcanal in light of the current heavy rains.

Mr Sikua says police have not received any reports of casualties from the region but they are waiting for confirmation from the police team and people from the two areas. He says a police team has been dispatched to areas east of Honiara to report conduct assessment on the level of damage caused by flooding.

Mr Sikua calls on people not to panic, but to instead exercise caution.

Meanwhile, Police have activated the Police Operation's Centre in response to the recent flooding caused by the continuous rain over the past days.

The Police Response Team, with the support of Participating Police Force assets, are doing all they can to assist the communities that are affected by the floods.

Police says assessment of the devastated areas continues to be conducted by aerial surveillance and foot patrols.

They will maintain a 24 hour response to this emergency situation.

The police officers on the ground have rescued two injured persons who are currently being treated at the National Referral Hospital and are doing all they can to try and locate two other reported missing persons.

So far there has been no confirmed report of fatalities.

The Police Club at Rove has been setup as an evacuation point for displaced people affected by the flood.

Approximately 138 people have been relocated to the Police Club at Rove and the police are working closely with the Red Cross to support them.

Deputy Commissioner Eddie Sikua is commanding the response operation from the Police Operation Centre at the Police Headquarters.

Mr Sikua says the police continue to prioritise their responses to this incident and he reminds people to stay away from waterways and places that are likely to be affected by the flood water.

Deputy Commissioner Sikua says the weather is unpredictable and these areas remain dangerous.

He says it is advisable that people are to remain calm and I urge people to check on their safety and that of their families at all times.

People are reminded that in case of emergency, call the Police Emergency number - 999.