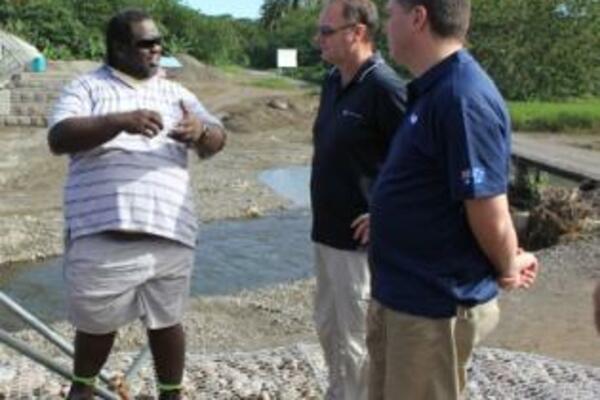 Mr Marles inspected road and bridge works in West Guadalcanal during his recent visit to Solomon Islands. Australia has helped fund these works.

"The new bridges are stronger, so they can withstand future flooding and importantly, the engineering works include "river training" to reinforce the banks of some of the rivers. This will help ensure that the rivers continue to flow under the new bridges rather than damaging the river banks. Some roads are also being realigned to strengthen the works against further flooding and the impact of climate change."

"As well, Solomon Islanders from local communities will be employed to keep bridges and drains clear of debris and cut the grass along the road verge," Mr Marles said.

The road works along West Guadalcanal are part of the Solomon Islands Road Improvement Project (SIRIP) Phases 1 and 2 which is improving and maintaining 120 km of roads and building or upgrading over 70 bridges and other water crossings.

Australia funds around half the project, with the two phases of SIRIP managed by the Solomon Islands Government and the Asian Development Bank, along with support from New Zealand and the European Union.

Australia's support to transport infrastructure in Solomon Islands is delivered through the Solomon Islands - Australian Partnership for Development: There are three main elements, including:

While in Solomon Islands, Mr Marles attended the opening ceremonies for the Festival of Pacific Arts, hosted a welcome function for the Australian delegation to the Festival and met Australian volunteers helping with the Festival.