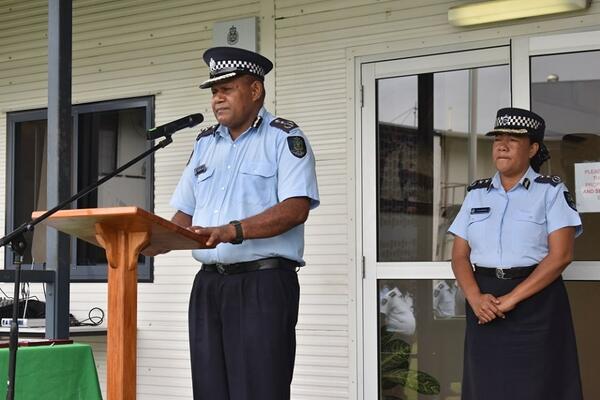 “I want to leave this legacy with you. Punctuality and dedication is very important as we deliver our services to our people. Bribe corrupts the heart.”
Source: Supplied
Share
Friday, 31 May 2019 08:54 AM

“A successful career starts with one’s dedication, passion and commitment to his or her career,” says Deputy Commissioner of the Royal Solomon Islands Police (RSIPF) Gabriel Manelusi as he is farewelled during a parade held at Rove Police Headquarter on 30 May 2019.

DC Manelusi downs his sky-blue uniform which he wore during his 34 years with the RSIPF and puts on the jungle green uniform as the new Commissioner of the Correctional Services of Solomon Islands as from tomorrow 31 May 2019.

During the farewell parade, the lad from Furona/Jejevo Village, Isabel Province, DC Manelusi shared his journey in the RSIPF when he started as a 19-year-old as a police constable going through all ranks there are in the Force and holding more than half of the positions in the RSIPF even as high as supervising Commissioner on several occasions.

His first attempt to join RSIPF was in 1982 when he sat for the exam in Buala but he did not receive any feedback. During that time his late father discouraged him from taking up policing as a career. He decided to take up his father’s advice and applied for an engineering job at Solomon Taiyo which he was selected.

Manelusi did not give up on his dream. By the end of 1984 he sat for another exam at Munda Police Station and not long after that he was selected to join the RSIPF by mid-1985. During that time he was also selected to undergo studies in Japan. DC Manelusi decided to take up policing instead.

“While I was in Noro, my supervisor recommended me to undergo studies in Japan. And that was in mid-1985 but at the same I was also accepted by the RSIPF. I decided to take up policing as a career.”

As a young Police officer back then, DC Manelusi served within the organisation starting at Central Police Station engaging in general duties, investigations, traffic duties and others and in 1986 he was transferred to Isabel Province. During those days his fortnight salary was a mere $90.

After serving in his home province, DC Manelusi was posted to the NCID at the Rove Police Headquarters from 1990 - 1997.

“I started off at the NCID as a police constable and was promoted to the rank of sergeant and staff sergeant. I was later posted to the Police Professional Standards Internal Investigations Department (PSII) where I spent another 10 years.

“It was very challenging those days, you know, I had to wake up very early in the morning and walked from my residence to work. But I believe that my commitment to duty and patience bring me to where I am today. The only thing is to fear God at all times.”

“I want to leave this legacy with you. Punctuality and dedication is very important as we deliver our services to our people. Bribe corrupts the heart.”

As he leaves the RSIPF, DC Manelusi is very proud of where the organisation has reached.

“I am very proud of the progress of the RSIPF and of the great men and women that serves within the organisation.”

“While there will be challenges ahead I believe that the RSIPF is more than capable of dealing with any issues it confronts.”

“I believe that it has regained the trust and confidence of the community and such strategic initiatives such as the Crime Prevention Strategy will ensure that our service delivery continues to improve.”

Manelusi has held several positions in the organisation as PPC, Director, Assistant Commissioner and was later promoted to Deputy Commissioner, a position he held until today his departure to become CSSI Commissioner. He led the establishment of the RSIPF Crime Prevention Strategy that has been implemented by the RSIPF for the past years up until now.

“The RSIPF Crime Prevention Strategy is the foundation of peace and safe environment for Solomon Islanders. If we maintain and continue to implement it, will build public trust and bridge the foundation of peace and a prosperous Solomon Islands. The success of the recent National General Election is the impact of the education, engagement, connectivity and empowerment of our people. It reduced what happened in the past.”

“During the journey I was not tempted to fall for money and dishonour our God, or my name, my family name, my oath in office, my profession and the people of this country whom I promised to serve. Never double-cross the people of Solomon Islands for whom we all work by engaging in any form of corruption. It will destroy you, the people and the country. The book of Ecclesiastes chapter 7, verse 7 in the Holy Bible says ‘a bribe corrupts the heart’. You must remember that no one is above the law.”