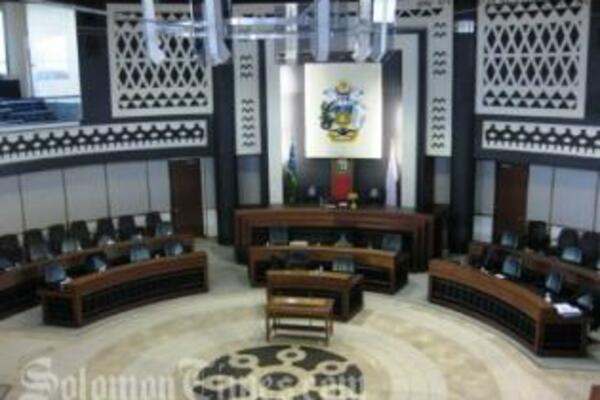 Inside the parliamentary chambers, where debate will resume today.
Source: STO Archives
Share
Wednesday, 25 November 2009 10:22 AM

Peter Boyers says that most parliamentarians were given very little time to study the contents and intentions of the proposed integrity bill. Mr Boyers said that such a "significant bill" would need proper consultations and scrutiny.

In what may well be a slight setback for the government, two former prime ministers who still have clout within parliamentary circles, Manasseh Sogavare and Sir Allan Kemakeza, both spoke against the motion yesterday.

Government will need the vote of three third of the house in order for it to pass the constitutional amendment necessary for the introduction of a political parties integrity bill. Peter Boyers is said to have the support of at least 18 members of parliament, enough to defeat the motion. The debate continues in parliament today.

A political commentator, speaking on the condition of anonymity, said that Dr Sikua's government should be congratulated for at least attempting to address "instability within the executive." "Many of our leaders spoke about it in the past, but none have acted upon it, so it is a first step whichever way it turns out, at least there is active debate, looking at pros and cons of such legislation, a true democratic approach."