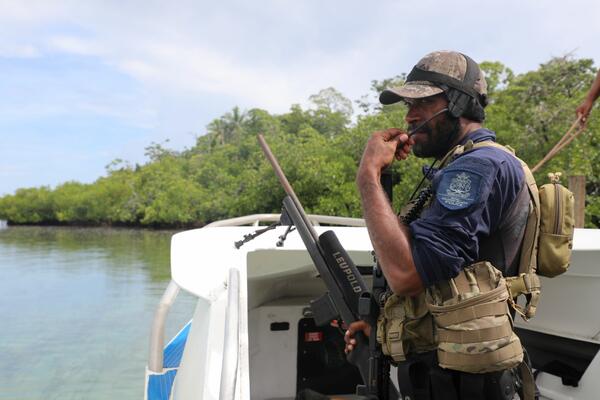 Regardless of the challenges faced at the border, frontline police and immigration officials are on full alert to deal with illegal border crossers.
Source: GCU, George Herming
Share
Friday, 04 September 2020 08:06 AM

Frontline Police and Immigration authorities at the Western border with Papua New Guinea will instantly turn back people attempting to cross from Bougainville into Solomon Islands as part of measures to contain the potential entry of covid-19 at sea.

The decision was reached after experiences with the arrest and detention of two Bougainvillean fishermen entering the Solomon Islands waters Wednesday last week. They were later released on Saturday.

One of the main reasons for this measure is the absence of a proper quarantine facility and testing capability in the Shortland Islands and Taro in Choiseul Province.

The only testing machine for covid-19 is currently installed in Gizo which is far from the border region. This geographic distance poses risks for officers escorting suspected covid-19 persons arrested at the border to Gizo for quarantining and testing.

Other challenges that were considered when making the decision included the cost and logistics of carrying out escorts as well as weather conditions and other geographical challenges.

Mr Herming said a Health Logistics team is currently on the ground at Nila in the Shortland Islands to complete a Triads and Isolation center in preparation for any impending cases of covid-19 transmission from the border.

Regardless of the challenges faced at the border, frontline police and immigration officials are on full alert to deal with illegal border crossers.

SOLMAT is currently rolling out safety and protective training programmes for frontline officers on how to use Personal Protective Equipment (PPE) to protect themselves when dealing with those crossing from Bougainville.

Since the declaration of the Western border as an emergency zone under the current State of Public Emergency and the subsequent closure of the border, people mostly from the northern parts of Shortland Islands have been facing difficult economic situations.

Buin and Arawa in the South and Central Bougainville are their traditional trading markets for centuries and their movements are guided by a special arrangement between the SI-PNG Governments to allow border dwellers to trade on both sides.

Deputy Director of Immigrations, Chris Akosawa who is a member of the SOLMAT said there is a provision in the Immigration Act that they can use to send back people on voluntary basis.

He said his team who is currently at the border with police have been maintaining close contact with the counterparts on Bougainville to inform people on the other side of these travel restrictions.

As a result, the Solomon Islands Government is beefing up border security to contain the entry of the virus into the country.

The maritime border which stretches from the Shortlands, northern parts of Choiseul and Malaita Outer Islands have been declared as no go-zones for PNG nationals in Bougainville intending to cross into the Solomon Islands side.