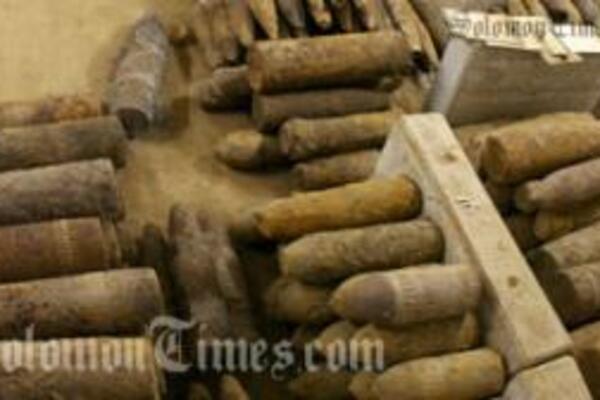 An unfortunate legacy of the six months campaign is the huge stockpile of unexploded bombs littered across the thick jungles of Guadalcanal.
Source: Photo Supplied
Share
Thursday, 18 June 2009 09:44 AM

Four men are currently in hospital after sustaining serious injuries from an old WWII bomb explosion. The four were said to have tampered with the bomb when the incident happened east of the Honiara International Airport.

The Police Media office says information about what actually happened are still sketchy as police are investigating.

The office however believes that the men were trying to cut open the unexploded bomb to obtain gun powder when it exploded. The gun powder is often used to make home made dynamites for fishing.

Hospital authorities say the four men are in a stable condition, with one under close observation.

In the six months between August 1942 and February 1943, the United States and its Pacific Allies fought a brutally hard air-sea-land campaign against the Japanese for possession of Guadalcanal.

An unfortunate legacy of the six months campaign is the huge stockpile of unexploded bombs littered across the thick jungles of Guadalcanal.

The police have warned the public not to tamper with these old bombs as they are still highly active. Police have reminded the public to report any sightings of old bombs to the bomb disposal squad, the only people trained to handle these deadly explosives.